Thrones of Desire: out now! 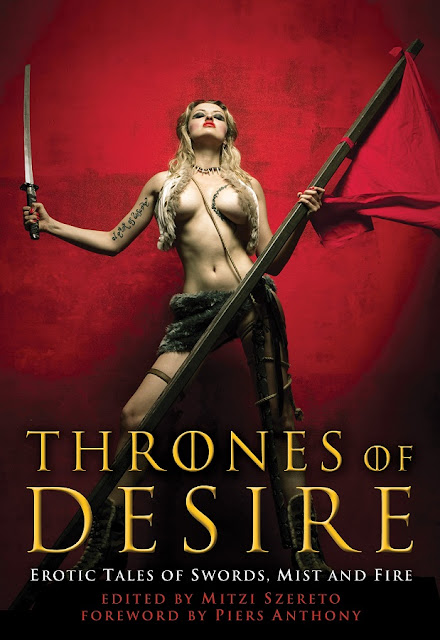 My contribution is Of High Renown, which is an angsty romance about an injured knight and a healer. There's love, betrayal, abuse, emotional conflict and the world's worst communication gap in this short story ... I'm exhausted just thinking about it! It was inspired by ... No, I can't tell you. It's just too embarrassing!

She remembered how she had misused him.

It was an unending struggle to keep him alive. The venom in his blood seemed to have destroyed his body’s sense of equilibrium, and threw him between burning fever and frigid tremors every few hours. Emlhi cleaned and bandaged the deep puncture wounds in his shoulder, but after that she simply tried to keep his temperature on an even keel—stopping the fever boiling his brains at one moment, piling blankets over him to maintain some vestiges of warmth the next. She fed and watered him, cut fresh bracken every morning for his mattress and, when she was not watching over him, tried to keep up the work of her smallholding. She snatched her own sleep during his chills, dozing in her father’s old room.

Between fire and ice, the knight would have passages where he seemed to be lucid but completely exhausted. Then as the fever flared up afresh he’d begin to talk, and sometimes try to rise from his bed. He stared at the ceiling and spoke to people who weren’t there. He raved about battles and campaigns and the horrors he’d witnessed, until Emlhi wanted to stop her ears for sorrow. Sometimes his hallucinations grew worse and in terror or fury he would lash out at her. If he hadn’t been so weakened by his illness, he might have been really dangerous.

It went on for days, and there were times she couldn’t understand why he did not die. She might have called in an older female relative to share the labor of care, but she guarded her sole right to Gareth possessively. Exhausted, she took strength from his stubbornness.

And she took more than strength.

The first time, it wasn’t her doing. She was sitting on the edge of the bed, tending him as he burned. She’d been wiping his face and chest with a damp cloth, dipping it in fresh water every few minutes and waving it about to cool it. He was twisting in discomfort, tossing in a delirious dream, his hands scrabbling convulsively across his belly. When she touched his cheek with the cloth he would turn his face toward it, like a baby seeking the teat. She ran it down the midline of his torso and he grabbed her hand, knotting his fingers around hers. Gently she freed the cloth with her other hand and continued to bathe him. He kept his grip on her. His head was thrown back, his larynx working. Then he pushed her hand into his crotch.

Until now she’d kept his hose on, unwilling to steal the last shreds of his dignity. It was a mistake, she realized; the fabric was sodden with sweat - and beneath it his cock was engorged, as hot and solid as the rest of him. He wrapped her hand around the thick length and squeezed hard, and, as Emlhi felt a blush flood her face, a great sigh of relief escaped his taut throat. Then he began to rub her hand up and down. She squirmed with shame but she didn’t pull away. His cock grew harder beneath her imprisoned grasp, lengthening as it filled. She was clumsy, passive, too inexperienced to know what to do. He masturbated with her hand until he spasmed—and then he relaxed, falling almost instantly into a dreamless sleep.

Emlhi, trembling, pulled her cramped fingers away and plunged them into the bowl of water.

That was the first time; it wasn’t the last.

And if you like Fantasy erotica, why not drop in at the ERWA chatgroup this Saturday at 3pm EST? (8pm in the UK, I think ... I'd so better get this right!)  I'm guest-hosting and willing to chat about pretty much any aspect of writing swords-and-sex. Hopefully there'll be some lively debate!

Details and link here
Posted by Janine Ashbless at 12:26

can't wait to read the rest of your thrilling story! I'm also still waiting for my author copy but I'm very honoured to be inside the covers of the same book with you.

Hi NylaNox! Oh yeah - this is one book I'll read from (lovely red)cover to cover. I'm absolutely thilled to be in it :-)

Ditto! I want to dig into the other authors' stories with gusto! So much fun! I think the red cover is lovely, too. Yay.