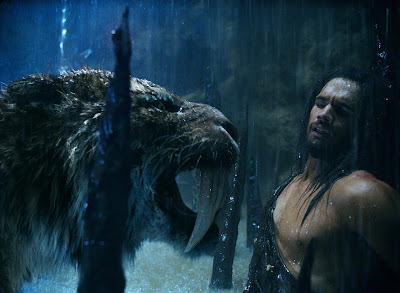 10,000 BC was a strange movie for me to watch. Because basically it's a Janine Ashbless plot, only with less sex and more mammoths. To be specific, it's almost the same plot as Burning Bright, my 2007 novel: sexy long-haired warrior (Steven Strait, above) has the Lurv of his life kidnapped by slavers. He follows across hostile wilderness full of primitive but decent people and eventually catches up with her at Baddie HQ which is civilised and decadent. In rescuing girl he starts a popular uprising and brings about the downfall of the nasty civilisation. Hooray.


What can I say? If there was an R18 version of this movie I'd have loved it. As it was, it was an enjoyable fantasy romp with plenty of eye-candy and pretty scenery. And mammoths. I have nothing against mammoths. I do wonder what they eat, besides snow and sand.

The main thing to remember is that this should not be viewed as a film with a historical setting, because if you have even the faintest knowledge of geography, ancient history or biology it is utterly ludicrous. It is a fantasy film. Remember that and it's quite fun. 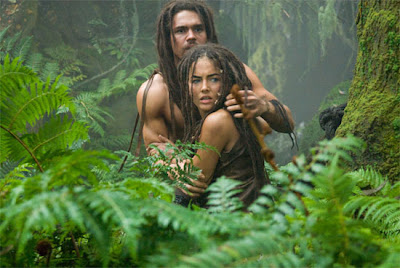 Posted by Janine Ashbless at 18:06 No comments:

This Mitchell & Webb sketch was pointed out to me by Portia Da Costa. I love Mitchell and Webb but right now that sketch is just too painfully accurate to be funny.
Posted by Janine Ashbless at 14:03 No comments:

Email ThisBlogThis!Share to TwitterShare to FacebookShare to Pinterest
Labels: writing 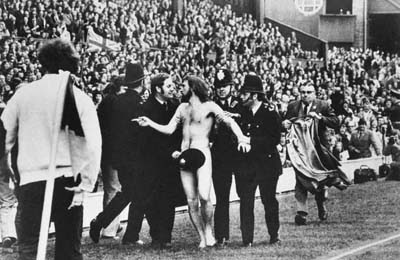 This is my favourite streaker photo, and probably the grand-daddy of them all. The guy is called Michael O'Brien and it was taken at the Twickenham rugby ground in 1974 during an England v. France match. There are a whole load of photos of this incident, but this particular frame somehow manages to be absolutely perfect. It's the grim-faced official hurrying up with a coat, the grin on the face of the policeman, and - above all - O'Brien's stance. Just for a microsecond the camera has caught him in the pose of a Renaissance-art Christ, which gives the whole thing a resonance and poignancy it otherwise would not have. Classic.
Posted by Janine Ashbless at 12:29 No comments: