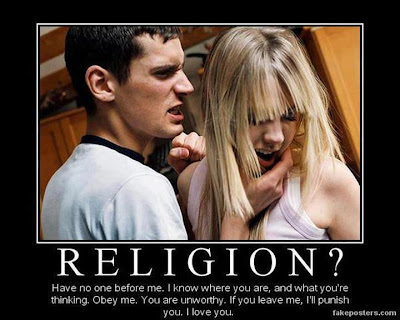 Which makes it sorta apposite that I went to see the new arena production of Jesus Christ Superstar at the weekend - which I enjoyed hugely, btw. Because when the musical was first staged on Broadway it was loudly condemned by Christians as offensive and blasphemous. Written without reference to the Resurrection, the two principal characters - Jesus and Judas - are portrayed as the only really sympathetic well-rounded people, and they're locked together in a self-destructive trajectory. Everyone else is either self-serving or sheep-like. Poor old Jesus himself is played as very human, worn-out, quite neurotic . . . and ultimately thoroughly fucked-over by everyone, including his God.


Even this week a production in Russia was closed down after protests from the Orthodox Church. Funnily enough, in the UK nowadays it's far more likely to be seen by Christians as an evangelising tool and a positive thing ...
People. They're just fucking weird. 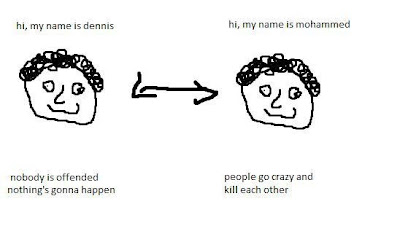 Blasphemy. Yes, it's rude and mean and hurtful. It can cause enormous trouble. 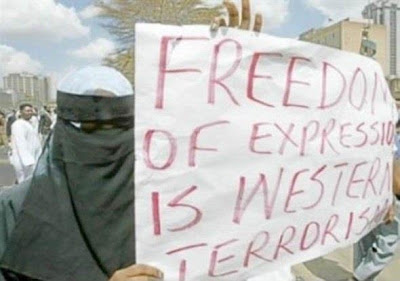 And in this world, blasphemy is not only unavoidable, it is utterly fucking necessary.

Posted by Janine Ashbless at 16:04

Email ThisBlogThis!Share to TwitterShare to FacebookShare to Pinterest
Labels: music, not working, the human race is crap

Ooh ... clever! Yes. We have the most peculiar triggers for anger, in our species. Not always obvious things. I was fifteen or so when I realised that novelty and non-conformity makes perfectly reasonable people angry. They come across someone or something they haven't encountered before, and they don't know how to categorise it, and their reaction is anger.

And on a meta-level, once I understood that, and was able to categorise it when I encountered it, I found intolerant people much easier for me to tolerate, lol!

I have to flag up that your "Completely beyond Irony" photo is a photoshop job. The original banner said "Behead those who insult Islam". Just as horribly violent, but without the extra inanity...
The original photo is the second one here and the banner can be seen partially hidden in the first photo:
http://www.snopes.com/photos/politics/muslimprotest.asp

Meanwhile... perhaps the most blasphemous cartoon ever: :)
http://www.theonion.com/articles/no-one-murdered-because-of-this-image,29553/

Jules - I am deeply relieved to hear that the "beyond irony" photo is a photoshop job! Of all the violent death-threaty ones I'd seen, that one distressed me the most, becuase of its sheer opacity to any form of rational dialogue. I am now chered up.

And yes, that's a wickedly offensive cartoon - but the text is what makes it pointedly funny:

Though some members of the Jewish, Christian, Hindu, and Buddhist faiths were reportedly offended by the image, sources confirmed that upon seeing it, they simply shook their heads, rolled their eyes, and continued on with their day.


The prophet Mohammed is noticable by his absence in that cartoon.

Isn't that the POINT of the image/article?