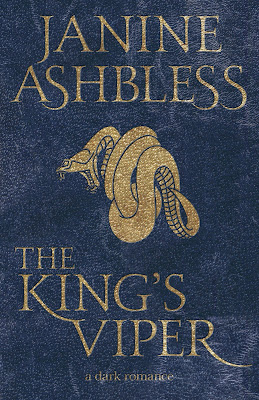 No! He shaped the word in his head even as he reached out and pulled her against him.

"This is high treason," he said raggedly. Then he kissed her.
IT'S UP ON SALE!

My game-of-thronesish hot romance The King's Viper is now available in a new e-edition so that you can enjoy all the sexual frustration, medieval politics, betrayal and heartache* with a stylish new cover!

When Lady Eloise of the Isle of Venn becomes betrothed to the King of Ystria, she looks forward to a life of luxury and status at the royal court. She certainly doesn’t anticipate being shipwrecked on the way to her wedding, escorted by the King’s assassin, Severin de Meynard, the most hated man in the kingdom. Nor does she anticipate them having to make their way back home to Ystria on foot, through hundreds of miles of enemy territory. Above all, she doesn’t expect to fall in love with the cynical, ruthless Severin.

Eloise and Severin struggle to control their growing attraction to each other because if they do not—if she returns to the King no longer a virgin—then they will both be executed. Yet their passion threatens to be far stronger than their self-control. Severin and Eloise are torn between duty and their burning need for one another, and both will face bitter sacrifice before the end.

Buy 'The King’s Viper' at Amazon US

Buy 'The King's Viper' at Kobo

Buy 'The King's Viper' at Inktera


*[SPOILER] It also has filthy, passionate sex and a HEA
Posted by Janine Ashbless at 17:49

Email ThisBlogThis!Share to TwitterShare to FacebookShare to Pinterest
Labels: The King's Viper

Pleased to see this on Amazon UK. Hope the self publishing works out well for you. x