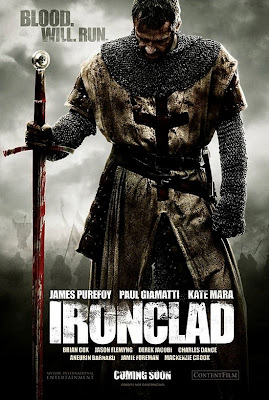 Synchronicity.
Last week I happened to be talking about my beseiged-in-a-fortress fantasies. So that day I got mail from Chris:

Go see Ironclad, Janine.  Kate Mara trapped inside a castle with 230 highly trained  men and a horde of barbarians outside.  Well, ok, not 230, more like 23, but hey, one of them is James Purefoy looking all rough and bearded.  Plus there's a giant scandinavian with his shirt off in the horde outside.

Which was enough for me.
Ironclad is a medieval movie about the siege of Rochester Castle by the dastardly Prince John. It actually covers an awful lot of the same ground as the recent version of Robin Hood with Russell Crowe, only on a tiny fraction of the budget and with the significant difference that Ironclad is not shit. 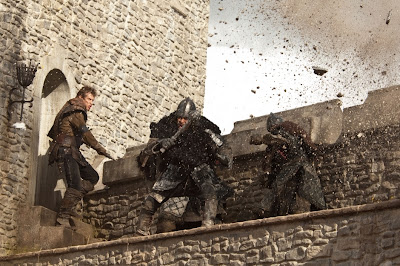 Leave your authenticity hat at home, forgive it the ropey CGI in the distance shots, and it is a tough, engaging fight movie. Good versus evil. Might versus courage. Forbidden desire. A bunch of favourite middle-aged British thesps in costume. All those things I approve of. And James Purefoy in the lead role. I approve of him too. 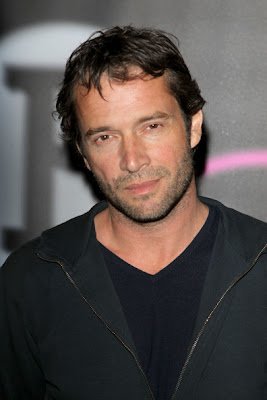 But be aware that it is really violent. I was frankly aghast that it got away with a "15" certificate: I have a nasty feeling we are drifting into American standards of censorship. Tongues and limbs get severed and in the battle scenes people get hacked up like so much meat. Realistic, maybe. I couldn't have coped at 15, that's all I'm saying.

Of course, the big problem with it fulfilling my fantasies is that the weather is bloody awful. Man, it never stops raining in the Middle Ages. Give me deserts! Give me sun-bronzed warriors!

Damn, I'll just have to write my own besieged-in-a-desert-fortress-by-barbarians fantasy. Oh look: I did. Several years ago. And you can buy it here. Or here. Sunshine (and sweat, and sex) guaranteed.
:-)
Posted by Janine Ashbless at 09:27

I've been thinking, a lot, about your philosophy, I guess, that for lovers to unite blood must flow and they must suffer.

I think you're quite right, Janine. If it's the real thing, the extremely passionate, nothing will tear us apart, we are willing to die before we give up thing, well, there is a battle or two to be fought.

Some people aren't up for the fight.Relationships already in existence, although tattered and cruel, must be considered and usually chosen over the scary now-what-everybody-is-against-us action.

And what about all our stuff.

I do respect couples who stay together forever and have 25 and 50 year celebrations of their marriage,

IF they're still in love.

But most of the time what's being celebrated is endurance, masked as honoured marriage vows.

I lost so much it's sometimes staggering. Same for Felix.
He moved in with me with his clothes, books, and a leather office chair tied to the top of the car like a Xmas tree.

Then he returned the car.

We adore each other every single day. I never thought I could trust a man, again, but I'd learned to trust one man. One honest man with intelligence and integrity.

It was so worth the fight.

Oh, Madeline, that's so moving. Thank you for sharing it with us.

I guess that sort of thing epitomises what I look for in romance: the willingness to damn convention and to sacrifice everything for love. Even if it means hurting others. In my stories of course, I engineer it so that no really valuable relationships are lost, which is one reason why my protagonists are almost always loners before they meet up. Real life, of course, is not that kind to lovers.

My best wishes and profound respect to you and Felix!