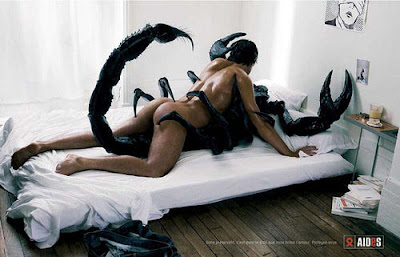 I do realise this picture will not be everyone's cup of tea (and can only fuel the debate that's been going on over at Billierosie and Neve Black's places, lol). But it trips my switches for both "woah - hot" and "aaargh - completely freaky". I found it via Danielle de Santiago's blog but it originates in a French AIDS safety campaign. And there's a version with a woman and a giant spider too...

I've never written man/scorpion sex. But I did write some scorpion-man sex in my novella The House of Dust:

Then I see them, because when they move they generate a flickering light like the dance of distant lightning. There are four of them, scorpion-men, bigger than oxen. Their rear parts are the bodies of scorpions and from the front grow the bodies of men. All parts are covered in black chitinous plates, and when those plates rub together the light flickers into being, illuminating their staring faces. Venom-laden tails arc high over my head. There are no words spoken here. They take me from him and rip from me my torn and filthy dress.

(The House of Dust can be found in Magic and Desire.)
Posted by Janine Ashbless at 08:10

THANK YOU for not posting the other picture! :)

oh i love that snipped about the scorpion-men!!! more more more:-)

Thank you Danielle - and for the pciture too!

i already surfed the net/amazon for this novella..but it didnt show up..:-/

The novella is in Magic & Desire, Danielle, along with 2 other novellas by other authors. I'm not sure where you're based but here's the Amazon UK URL:

i m based in..drumms*...germany..so not as far away as most of our american fellow writers and blogland friends..

i checked the link and was totally pleased to see that its you and also portia da costa in it..i dont know her personal but like her style and blog:-) i got to get myself a copy..:-)