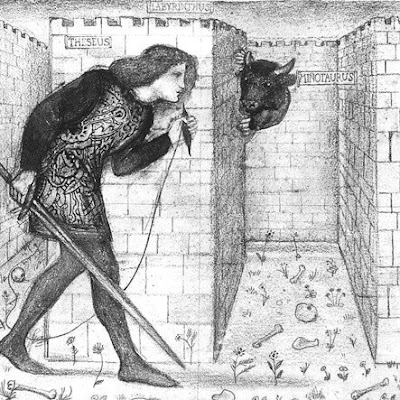 This is the story. The one I thought I'd never be allowed to write because it has a minotaur - the Minotaur - as a principle character and Black Lace Don't Do That. But it's all in the way you write it, I found out. (More details on how this got worked out on my website, under "Author's Notes" for Dark Enchantment.) I am fantastically proud of the end result!


The Red Thread is set in ancient Crete, of course. Our - *ahem* - heroine, the princess Ariadne lives in the royal palace. Below the palace is a labyrinth of cellars in which is trapped the outcast Asterion, and she enjoys sneaking down to see him.

He glared at me, his exhalations loud. But he didn’t stop me moving in to his knees. This time I didn’t sit demurely on one knee, though: I picked up my long skirt and straddled both of them, facing him. His legs were hard under my thighs and bottom.

‘Don’t you like this?’ I asked in my meekest voice.

‘You shouldn’t be doing it.’

‘I’m not a baby anymore, you know. Look.’ I gathered the flounced linen folds in my hands, drawing them up my pale thighs. Asterion looked down between us and seemed to stop breathing, as I revealed the dark delta at my groin. ‘I have fur.’

‘Would you like to touch it?’ I asked softly.

Very slowly, he shook his head.

With a moue of disappointment I let the cloth fall again, veiling my immodestly spread thighs. ‘Can I see yours?’

‘It’s not like it would be the first phallus I’ve seen, silly,’ I chided him. ‘I’ve been to the games, and seen the bull-dancers. And Cholios, when he’s on guard outside my room, he always touches himself when I walk past. And his sticks out under his chiton. He rubs it like it itches, but that just makes it stick up harder.’ With great daring I put out my hand to touch the bulge beneath Asterion’s tunic. He was wearing the simplest of short chitons, under one shoulder and pinned over the other, with no belt. Undyed linen, it had the labrys pattern of the royal household worked in red thread around the border. It might even have been a piece I’d woven myself; weaving was after all the principle duty of the women of the palace. ‘I just want to see.’

‘To see whether you’re the same as other men.’

It was easy to pull the cloth aside; he did not stop me. A sigh escaped my lips. His phallus lay flopped in a curve on his upper thigh, smooth and soft-looking like the finest kidskin, but stirring restlessly even as I watched. His foreskin pouted, wrinkly.

‘Am I the same, then?’ He sounded a little bitter. 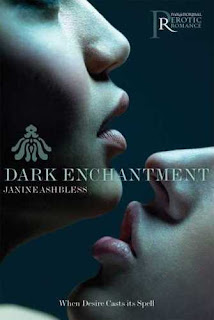 ‘You look bigger. Can I touch it?’

Strain was audible in his voice as he said, ‘Because if you touch it, it might get angry, and then I will hurt you.’

‘You are only little.’

I fiddled with the edge of my bodice, stroking my breast. ‘What if I were to stroke it very gently – would it get angry then?’

‘I fear so.’ His phallus stirred, straightening as it filled out. It trailed a smudge of wetness across his thigh.

‘But I can stroke you here.’ I ran my hands down his chest. ‘You like that, don’t you? It doesn’t make you angry?’

‘And I don’t mind you stroking me, Asterion.’ I took his hands and placed them on my breasts. They were warm, and they cupped and enfolded me. They felt so strong that I was washed with dizziness, and pressed myself into his caresses. ‘That feels nice, see. Just stroking.’

'Shall I tell you a story?’ I wrapped one hand around his phallus. It was definitely bigger now, and almost standing upright – and as I squeezed experimentally I felt it harden under my hand. Asterion did not object; he seemed mesmerised by my breasts, which he was playing with. I’d never touched a man’s phallus before. I was delighted how warm it was, how silky to the touch, how alive. My fingers could not quite circle its girth. It was difficult to take in all the new sensations and to talk at the same time.


Next excerpt on Saturday.
Posted by Janine Ashbless at 09:19

[This may be a duplicate comment, 'cause I am a klutz. Sorry!]

Mmm ... sweet and sensual. (With straddling and skirt-lifting.) Mmm ...

From you Jeremy, even duplicates are welcome! But actually you only did it once.
:-)

P.S: The Red Thread is not as a whole, I'm afraid, a sweet sensual story. It's quite cruel and brutal and tragic. That's Greek mythology for you.