Every Monday for the last few months I've posted an excerpt from one of the stories in Lust in the Dust. 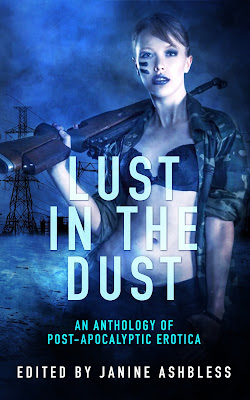 She tentatively reached out and stroked his damp hair. He closed his eyes and in his imagination saw wires plugged into flesh. Tubes feeding and removing unknown matter. He jerked back from her touch, a hand left wavering between them. Her smile faded, she looked like she might cry and when she spoke her voice was low.

He felt like a monster himself. She had been nothing but friendly ever since he got here. “I’m sorry. You’re right, you’re not a monster.” He searched for the right thing to say and came up empty so instead just told the truth. “You’re the first person I’ve met in years and I’m so glad I found you.”

She tried again, hesitantly slipping her hand into his. He leaned closer and when she didn’t try to avoid him he kissed her. Lightly. Tenderly. She sighed into his mouth and brought her arms around him. Fingers digging into his back. They kissed long and hard and for the first time in years he forgot about grief and hardship and fear, and lost himself in the scent and taste of her. She drew back and he was concerned he had somehow crossed a boundary.

“God, yes! It's been so long. Um… I’m sorry if this sounds weird, but… would you feed me another peach?”

He fished the last piece out of the tin and with now clean hands offered it to her. Eyes moist and shining, she took it and his fingers into her mouth. Greedily sucking as the sweet fruit slid down her throat, and keeping eye contact all the while. She continued staring hungrily as he withdrew his fingers, now completely free of juice. Her hands gently tugged the jacket away and caressed his hips. Her nails traced their way over his lower stomach, brushing him in a tantalising motion. Moving ever nearer towards his stiffening cock. She lazily tangled her fingertips into his pubic hair, and he saw her eyes fill with delight at the way his breathing quickened, the more she toyed with him. He was flushed and moaning. Wanting… no, needing more, but without the courage to ask for it. Finally she took pity on him and squeezed the base of his straining erection. He inhaled sharply and slammed his palms down flat either side of himself, fearing he might lose his balance.

He obeyed, his eyes widening and his breathing increasing as she drew her fingers tightly up towards the tip, then back again. She became gentle and stroked him in a languid, unhurried motion that quickly drove him to distraction. He reached tentatively for her top and she helped him remove it, then blushed deeply as he ran his hands over her breasts, trapping her nipples between his fingers, feeling them stiffen.

“Kneel up,” she said hoarsely and he hurried to comply. She guided him into her mouth and began to work him, sucking hard and running her tongue in circles until he felt giddy, all the while making muffled noises of pleasure as if she were at a banquet. In no time at all he was coming — and at the same time the till began to behave in a very erratic manner. Numerals flashed across the display too fast to read. The cash drawer slammed open with a ding. Claire seemed to convulse and a flurry of coupons were spat into the air and rained down about them.

Buy Lust in the Dust:

Amazon smartlink
iBooks
Google Play
Kobo
Barnes and Noble
It's the end of the world as we know it.

Peace and plenty are ideals barely remembered. Everything we used to rely upon has crumbled away, and pleasure is something few can afford. Every joy has to be fought for. When all the trappings of a civilised life are taken away, all we can hope to truly call our own are our bodies and our hearts. In the ashes, we make alliances where we can, and find solace and humanity in unexpected places. And maybe even a little hope for the future…