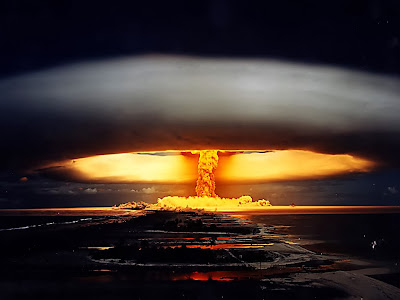 One of the (many) reasons I have been running round like a headless chicken recently and not getting any work done, was last weekend's overnight lock-in at a nuclear war bunker.


This is Kelvedon Hatch. In the event of a nuclear strike, they were going to run the British government from a reinforced hole in the ground, just north of Greater London. It is three floors deep, with huge air-filtration devices, and has enough space for 600 people to live for 3 months, packed in like battery hens, before emerging into the radioactive devastation and anarchy above.

I'm old enough to remember the fear of nuclear annihilation. I was actually a member of CND so I'm probably still on an official file somewhere. I remember this:

Kelvedon Hatch is open to the public most days, so I did the audio tour before the main event of the weekend. It brought it all back, in horrible creepy detail. I felt physically sick at points.


If you're too young to recall the era, you've no idea what the pessimism was like. In fact, I don't even know the worst - I'm only old enough to remember the tail end of the Cold War. My parents were there for the Cuban Missile Crisis and say they went to bed each night literally not knowing whether they'd be alive in the morning.


Some things get better.
I'd rather live with the War on Terror.

What was I doing there? Well, we were taking part in a Cthulhu-themed horror LARP set in the 1950s.

Email ThisBlogThis!Share to TwitterShare to FacebookShare to Pinterest
Labels: Janine in the flesh, not working, the human race is crap

It was a Cthulhu-themed event so OF COURSE you all died! :)