In Greenwich, London, on the Thames bank and right next to the international date line, is a bloody big tent that used to be called The Millennium Dome and is now officially the O2. I was there last Saturday, on a beautiful sunny afternoon, to see Iron Maiden in concert.

But before rocking out we climbed across the roof!

We hadn't planned it, but we grabbed the opportunity to join a tour: 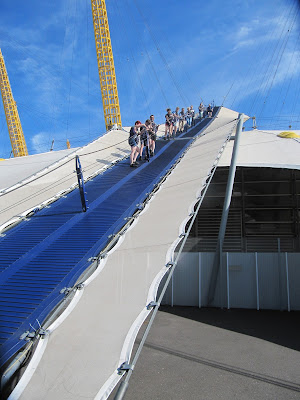 You walk on a springy rubber mat that bounces like a trampoline (you are not supposed to bounce), and you're clipped to a safety line for the ascent and descent, which are actually pretty steep. 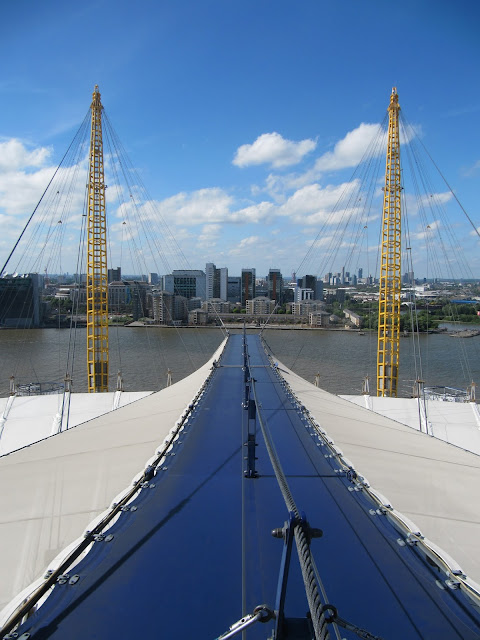 At the apex you can unclip and take photos and admire the panorama of London's docklands: 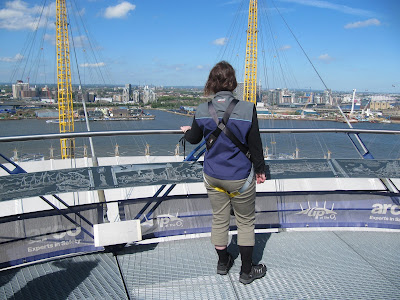 The structure is an exercise in sacred geometry, btw. The canvas dome has 12 supporting struts (one for each month of the year), is 365m across (for the days of the year) and 52m high (for the weeks). And Up At the O2 are celebrating their 5th anniversary on the 21st June (Summer Solstice) although the first public event within the canopy was actually staged on 24th June 2007 ... which is St John's Day, the traditional Midsummer.

No pagan conspiracy to see around here folks, no ...  😉
Posted by Janine Ashbless at 22:12

Email ThisBlogThis!Share to TwitterShare to FacebookShare to Pinterest
Labels: Janine in the flesh, not working, The Wheel of the Year, travel