Today's guest is Lea Bronsen, with an excerpt from her new release Fiery 10-16, a scorching firefighter tale of desire, abuse and bravery. 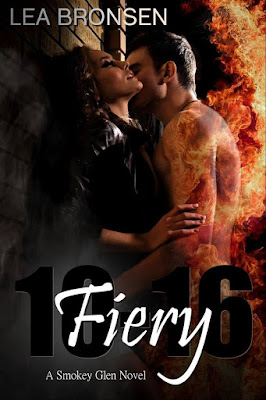 Runo Wiggins is a scarred man, the wounds etched into his psyche deeper than those on his skin. But he loves his job: fighting fires helps reenact his survival of a house fire as a teen, one that killed his mother and brutal stepfather.

Dawn Caravello is married to a psychotic drunk. She can take his beatings as long as he doesn't touch their children, and she'll do anything to put food on the table, even if it means stealing from the town hero.

When Runo meets the fiery Dawn, sparks fly. But he suspects she is victim of the same abuse as his mother was. As day turns to night, the past and the present blend in an exhausting, nerve-wrecking chase to prevent another death.

After everyone had left the showers, Runo found a folded towel on a shelf, wrapped it around his waist, and walked back to the empty locker room.

A silhouette appeared in the door.

So damn sexy in her black mold-to-her-body dress.

What did she want?

Her shiny gaze wandered down his chest and abs, and stopped at crotch level.

Holding his breath, he sat on a bench with his elbows on his knees and stared back.

She wanted him, but he should ignore it. She was going through emotional distress and might do something she’d regret later.

He still motioned for her to come over. They were both adults. Whatever happened, he would put on account of exhaustion. And the fact he’d been fired. That she’d left her husband. Nothing wrong with a little mutual comforting.

She obeyed, moves slow and cat-like, and sat on his lap.

He circled her slim waist with a hand and fisted her hair with the other, pulling her face down to his. Their open mouths collided. Driven by need, he sucked on her lip, then dove in, his tongue seeking hers. She smelled, tasted, and felt like fucking heaven, and he wanted more, more. Beneath the towel, his cock thickened and lengthened.

She took his hand from her waist and brought it to a breast. He weighed its fullness and firmness in his palm. Perfect. Needing to taste her warm skin, he reached for the top of her dress and tugged until the garment slid off her shoulder, exposing a hard, dark brown nipple. Enticing. He leaned forward to lick and suck the bud into his mouth.

She moaned and spread her legs, causing her dress to glide up her thighs. She took his hand again and brought it to her panties. Whew, so fucking hot and wet. He was on a roll, couldn’t stop. Mouth closed on her nipple, he continued to suck while diving two fingers inside her wet hotness. She clenched her inner muscles around him, jerked her head back, and let out another moan.

Loving that he could provoke such a reaction, he gazed at her sweaty face and grinned, relishing the sight of the aroused and astoundingly sexy woman on his lap. His inflated cock pushed against the towel; she had to feel it pressing beneath her thighs. With two fingers still pumping inside her, he moved his thumb to her clit and toyed, rubbed in circles. She writhed on his thighs, danced to the rhythm of his playing fingers, her moves so intense he had to hold her with his free arm so she didn’t fall off his lap. Her intoxicating scent of arousal drifted to his nose, enhancing his own building pleasure, and the rolling movements of her thighs rubbed the tip of his cock back and forth. Jesus, she was on fire. A pussycat on fire.

She whimpered, her breaths coming out harsh and short. “Harder. Faster. Please!”

He pulled out of her wetness, grabbed her tiny bundle of nerves with his thumb and index finger, and squeezed. In response, she shot her hips in the air and trembled. So near the edge. A little more—he dove for her breast, caught her nipple between his teeth, and bit. She came then, arching her back like a bent bow, mouth open in a silent scream.

Wanting to enjoy her climax to the fullest, he dipped a finger inside her convulsing pussy again. The contractions of her inner muscles combined with her rhythmic rubbing of his cock undid him. His balls tightened and hot cream shot through his rock-hard length in quick pulses. He had to be spraying through half the locker room. His mind blackened and he barely held back a groan.

“Quick.” Not having time to catch his breath, Runo pulled his finger out of Dawn and pushed her off his lap. “Go.”

She staggered to a corner and flattened her dress, moves panicky.

Seconds later, Captain Norton stood in the door. “There you are.” His cold and sharp voice cut through the awkward silence as he stared from Runo to Dawn.

Too tired for bullshit, Runo snapped. “What?”

“A Joe Caravello is asking for his wife.”

Lea Bronsen says: I like my reads hot, fast, and edgy, and strive to give my own stories the same 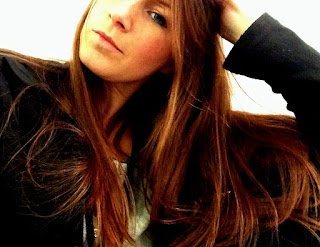 Thank you for having me!