Every Monday I post a filthy excerpt for your entertainment! 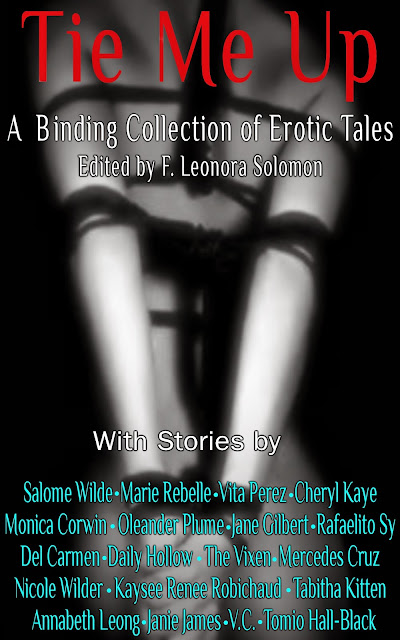 F Leonora Solomon, editor of that naughty/knotty volume, gives us this special intro to the collection:

"I am not a novice as an editor of anthologies, far from it. But when I finished the completed manuscript of Tie Me Up, I felt such a sense of accomplishment and pride that was unrivaled from anything I had felt before. This is my first anthology with Riverdale Avenue Books, and I am over the moon to have this anthology published with them.
Tie Me Up, as I told people when I was editing it, is exactly what it sounds like in terms of erotica. But do not believe for one second that it is your typical bondage anthology. It is not. It is a very sexy book as the genre demands, but it is also smart and filled with surprises. It is soft-core and hardcore at the same time. I had the pleasure of working with authors that I worked with before, and authors I worked with for the first time. Every story in this book stirred something in me, and I can promise you it will stir something in you.
BDSM is the fetish du jour these days for many reasons, but especially because of that book which is mentioned often within these pages, because it is inevitable. But what I want you to take away from reading this anthology, aside from being aroused more than you ever thought possible, is to realize that bondage can be many things. It is not just the ideas that you conjure in your head of people tied up or suspended in the air. Bondage is like any sexual activity between consenting partners, and can be a more than fulfilling exchange that connects them in ways they were not expecting. There are a lot of revelations uncovered in this anthology where people are transformed. Any good sexual act or reading activity should take you to the next level. I hope Tie Me Up will take you to that level..."
I needed a new lover. In fact, I needed a perfect lover. After several months of being single, I realized that I wanted someone in my life and, more importantly, in my bed. However, finding a new man was proving to be difficult. I didn’t wish to hang around bars or clubs late at night, my friends were all married and there were no unattached men where I worked. So, I turned to internet dating.

But after several fruitless months of exchanging messages and meeting up with unsuitable men, I decided I needed a new approach. I made the decision that I would not ask for any personal details or photographs of the men I corresponded with. Instead, I would limit myself to the constraints of the written word and begin to build a rapport with as many eligible suitors as I pleased. I eliminated those I did not feel I would be compatible until, finally, I narrowed it down to the two potential lovers with whom I felt I shared the best connection.

My kinky plan was to then invite each of these two men to visit me in a hotel room, where I would be blindfolded so that I could not make any judgments about their physical appearance. They would be allowed to bind me, and do as they pleased for exactly one hour. The one who satisfied me the most, would become my new full-time lover.

I wrote to many men, upfront about my naughty plan and lascivious intentions. That in itself weeded out those for whom this was a step too far. But I needed the excitement, and sharing the edgy thrill of my plan would ensure that my co-conspirator was of a similar mindset and willing to fulfill my dirty little fantasy. Surprisingly – or not – most found my proposal extremely exciting. I exchanged messages and e-mails with a dozen of them and, finally, I had determined the two men would I would invite to the hotel room. On paper they were witty, intelligent and charming. I looked forward to meeting them although, of course, I wouldn’t get to see them properly until after I had discovered what they could do.

Nervously, I sat on the bed awaiting Carl. I wore a black negligee that tied with ribbon at the neck. It was sheer, so my breasts and hard nipples could be seen through the flimsy material. I had on black stockings but decided not to wear panties, leaving my shaven pussy on display. My blonde hair was curled into loose corkscrews and I wore light make-up. Perched on top of my head was a flight eye mask at the ready.

I set the timer on my phone for exactly one hour, and waited. Minutes later, I jumped at the sound of somebody knocking three times on the door. I switched the timer to start, and walked across the room. I felt a rush of excitement as I opened the door slightly and asked,“What’s the password?”

Carl’s voice was deep, resonant and rather sexy, as he said, “By the pricking of my thumbs, something wicked this way comes.”

I pulled the mask down over my eyes, and opened the door fully. I heard him enter the
room, then close and lock the door. Cautiously, I walked in the direction of the bed and when I felt its edge, carefully climbed onto it.

Carl guided me on the bed, and arranged the pillows so that when I lay back I was not flat but raised up as if I were about to watch television. He held my left wrist, and I heard the metallic, seductive snap of handcuffs as he cuffed me to the bedpost and did the same with my right wrist. The cool metal rubbed my skin, and the handcuffs jangled when I moved my arms. I could hear the rustle of clothes, indicating Carl was undressing.

The bed dipped – he sat alongside me. The ribbon at my neck was untied, and my negligee fell open, exposing my body. I felt vulnerable knowing he was looking at me, at the way he had bound me to the bed and how I was there for him to do as he wished. It was incredibly exciting, not knowing when he was going to touch me or where and whether he would enter me with his tongue, fingers or cock.
I felt his breath on me, then his large hands groped my breasts, squeezing the flesh and pulling at my nipples. Then I felt his teeth gently, but painfully, bite my erect nipples and hair brushed against my breasts. Carl had a beard, I thought, as he scratched my skin with its bristles. The roughness made me purr with delight. He caressed, sucked, tweaked and pinched until I was moaning and tried to wriggle my inflamed nipples from his grasp. The handcuffs jangled as I writhed.

Carl straddled me, his knees pressed against my sides. As one hand fondled my breasts, I felt his other slide down between my thighs. The anticipation was thrilling. I parted my legs even further, ready for his fingers. When he touched me, I jolted up with desire. His fingers explored my pussy circling my clit and crept closer to my opening. I was already panting with lust, but when he plunged his fingers deep inside me, I gasped loudly, my mouth wide with longing. He withdrew his fingers and paused; I was desperate and when he finally ploughed them back inside me, again, I let out a loud moan of pleasure. He finger-fucked me, just enough to make me wonderfully wet and make me whimper beneath him. When he withdrew his fingers, I waited impatiently for them to open me up and explore my pussy again. He shoved them back deep inside, and I shuddered once more. As I let out a cry of passion at the glorious sensations between my legs, he forced the tip of his erect cock into my mouth.

I took him greedily into my mouth. His hand left my throbbing pussy, to steady himself against the wall. I closed my lips around his thick member, delighted to discover his massive size. He fucked my mouth, withdrawing slowly and then pushing himself in. His cock slid over my tongue, and edged its way to the back of my throat. I swirled my tongue around the sensitive tip of his large cock head and listened to him moan. I imagined what I looked like: sitting up naked in bed, blindfolded, my wrists handcuffed to the bed, Carl straddling me with his hard cock deep in my mouth. The image excited me, and I sucked him even harder.

“Yes,” he moaned. “This is what your mouth is for. It wants to be fucked.” He pushed harder and faster as I sucked, licked and teased, wanting all of his enormous cock in my mouth. His breathing was ragged, and he moaned louder. I could tell from his frantic thrusting that he was ready and, almost at once, I felt him shudder in my mouth and his thick come pump down my throat.

Tie Me Up can be bought at
Amazon US : Amazon UK
Barnes and Noble
and direct from Riverdale Avenue Books

And if you want to read more juicy excerpts from all thirteen short stories, just follow this link to F Dot Leonora's blog
Happy browsing!

Posted by Janine Ashbless at 16:37