This week's excerpt is from Haunted, the brand-new deliciously spooky and sexy paranormal e-book by Sommer Marsden: 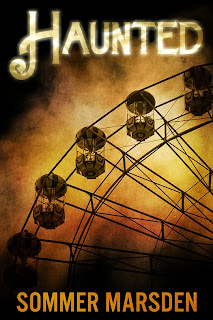 Two people lost and alone in life searching for answers…Maddox visits abandoned sites to take photographs and figure out his future. He haunts the places that are monuments to the way he feels inside. Stark, empty, raw. And Olyvia searches for answers to her own painful loss by hunting ghosts. Trying to comfort herself by seeking proof of an afterlife.One haunted amusement park with a dark history…Maddox and Olyvia recognize kindred souls in one another. But a chance to fully explore their connection is a luxury they may not have. There’s a ghost stalking Screamland hell-bent on revenge. And it’s targeting them...


It hadn’t been that long since they’d been together, and yet, much to Olyvia’s surprise, her desire for him was as fresh and sudden as the first time.

She kissed him hard, kissed him deeply, trying to pour all her fear and worry and angst into that kiss and release it.

It worked. Her heart lightened, her body followed suit. Between her legs she grew wet then wetter still. Her heart seemed to be beating faster and slower at the same time. Her mind cleared, and when Maddox slipped his hand up under her tee, her nipple hardened beneath his stroking fingers. Pleasure uncoiled slowly from her breasts to her belly then wound lower with a slow lick of passion.

“Is this safe? Should we be doing this?” he muttered the words along her skin and painted a hot line from beneath her ear to her collarbone with his tongue.

“We’re good, I think. We’re good…” She thought they were. She hoped they were. However, she wasn’t really sure. And yet, her urgency to be with him seemed to override everything else, even the abomination they’d witnessed before confining themselves to the animal emporium.

She lay back, pulling him atop her and holding him close. His fingers skated down her shoulders, raising goose bumps as they moved. He stroked her sides, and the small muscles in her stomach quivered from the stimulation. He pushed a hand down into her pants, breached her panties, and parted her with his fingers. He drove a digit into her with ease, and Olyvia sighed as her body clenched around him, triggering more pleasure.

“God, Olyvia,” he said. He pushed deeper, stroked the wet walls of her pussy then added a second finger. Then, moving so he could watch her face, he proceeded to thrust over and over, manipulating her body in a way no man had managed before. She never came just from being fingered. And yet, she found her body tightening then relaxing, over and over again, as he fucked her easily.

“Come for me, pretty girl,” he whispered. When he smiled, she felt that lightness in her heart go from mere lightness to something ethereal.

He found her clit with his thumb and pressed, rubbing gently as he continued to move his fingers in and out, in and out. He bent to kiss her. A tender kiss that stole her breath. When she parted her lips and pushed her tongue against his, Maddox went with it, kissing her more aggressively.

He added a third finger and played his lips across hers again. She broke. Surrendering to the goodness he’d elicited. She came, clamping her lower lip between her teeth to keep herself silent. She arched up to meet his hand and it forced his thumb more firmly against her clit. The orgasm kept unfolding, a warm, slow coil of pleasure and release.

“Good girl,” he said, smiling down at her. He leaned in, raked his teeth along her collarbone and sat up to pull up her tee, unclipping her bra. “I want to get naked, but I’m worried.”

He looked worried, and she felt a moment of guilt for saying screw it and going with her instinct to be with him again. But when he grinned at her and leaned over to suck her nipple into his mouth, she forgot that wasted emotion. Her nipple spiked hard against his tongue, her breast breaking out in gooseflesh from the light scrape of his teeth. He moved to the other one and sucked hard enough that she felt the draw on that flesh in her pussy.

Maddox placed soft kisses along her ribs then moved down lower to her belly. He left heat on her skin as he licked her hipbone then dragged his tongue across her stomach to the other side. His fingers were thick but efficient on the button of her jeans. He worked them down over her hips and tugged her panties along with them, but only to her knees. He left them there, a denim prison binding her legs. Leaving her unable to spread them completely.

He parted her pussy lips with his fingers and studied her. She pushed a lock of his hair out of his eyes and stroked his strong jaw, his cheek. The sound of his stubble whispering beneath her fingers made her smile.

He knew it, too, because he flicked her clit repeatedly with the tip of his tongue then sucked it hard. Then again. Maddox changed tactics, working his way all around that tender bit of flesh, not touching it deliberately, making her mind go blank and her body go insane. She arched her hips—desperate. She pulled his head then remembered his wound and raised her hands above her head with a groan as if she didn’t trust herself. Because she didn’t. He chuckled, his breath hot across her sensitive skin. He sucked again, and when she groaned, he licked her clit in a flurry of quick swirls of his tongue until she was coming a second time, her hand clamped across her own mouth to stifle her cries.

But, when she removed her hand, she whispered just one word. “Maddox…”

Visit her at Unapologetic Fiction