Heart of Flame out in paperback!

To celebrate my book release and my immense relief, here's an excerpt from Heart of Flame. Which, please note, is Arabian Nights romantic adventure and not, strictly speaking, erotica ... but it has some very steamy scenes nonetheless.

And a lot of arguing. This is by no means the last, or the worst, row my hero and heroine have... 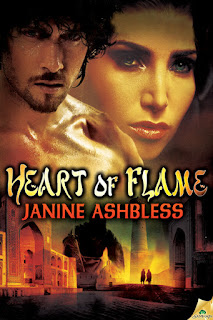 It took several hours pursuing the tracks of the magical mount, but she caught up with him eventually. She saw the Lion Most Strong from a good way off, standing motionless in the middle of the broken landscape with its silver body catching the sunlight, and as she neared she saw that it stood with one heavy paw on the chest of a supine Rafiq, pinning him to the ground. His waterskin lay to hand. He had crooked an elbow over his face to shield it from the afternoon sun, and she was perversely annoyed that he wasn’t struggling, even though he’d been held captive for hours and must have given up long ago. She would have liked to have seen him struggle and rage.

When she was ready she approached on foot and ordered the Lion Most Strong to stand back. It released Rafiq, who let out a grunt of surprise. He struggled up onto his knees, blinking at her, his face crusted with sand. ‘Taqla,’ he groaned.

She stepped in as he lurched to his feet and punched him as hard as she could in the face. At the last moment he saw her fist and flinched away so her knuckles stuck him only a glancing blow, which was perhaps a good thing because she managed to skin her knuckles on his teeth and split his lip even so. He staggered a little. She clenched her stinging fist, shocked how much it had hurt her and blaming him for that too.

‘Taqla—’ He lifted a hand in dismay to his bleeding lip.

‘You stole my Horse! You dumped me in the desert! You son of a whore!’ She was burning too hot with fury to judge her attacks; when she struck again at his face he grabbed her wrist and pulled her hard against him, seizing the other hand as it flailed and wrestling both wrists behind her to pin them at the small of her back. She was still too angry to be afraid. ‘How could you?’ she spat. ‘After everything?’

‘Taqla!’ he shouted as she twisted furiously in his arms; “Shut up! Stop it! Listen to me!’

She stopped struggling to draw breath, snarling. He was very strong and held her easily, his face over hers.

‘I had to take the Horse. I am sorry, but I need it to find the house of the djinni. I had no choice. I would have returned it when I could.’

‛Tell me your ass is made of solid gold and you shit diamonds! Shall I believe that too?’

He shook his head, teeth bared. ‛Taqla—I left because I couldn’t bring you with me and see you hurt.’

‘Me—hurt? Haven’t I saved your life before now? Haven’t you needed me every step of this journey?’

‘Yes!’ He turned his face aside so he could spit blood into the sand, then caught her gaze again, his eyes hot with anguish. ‘Yes. I’ve needed you. But this is different. There’s so much chance of you getting killed-’

‘No. Never. Taqla, listen to me: I couldn’t see you hurt for my sake. I couldn’t bear it.’

‘We had a bargain,’ she snapped. ‘We were in it together. You get what you want and I get what I want.’

He shook his head as if in pain, and when he spoke again it was under his breath. ‘I read the scroll.’

‘The spell in the Scroll of Simon.’

She felt like she’d been kicked in the stomach. ‘Oh,’ she said, while the import of his words sank in and the desert seemed to reel about her. It had never occurred to her that he would be able to read Greek. She was suddenly horribly conscious of the way he was holding her up tight against his hard body. ‘No,’ she whispered, trying to shrink away from him. She couldn’t move an inch.

‘How could I let myself hurt she who loves me the most?’

‛Look, I saw you drowned in the swamps of Basra. I couldn’t do that to you again—not now. I couldn’t let you risk your life out of love for me.’ His voice was soft, all shouting done.

‘Taqla, why are you afraid of admitting it?’

She groaned. His lips curved, self-deprecating, as if knowing he was inviting another blow.

‘I think I know exactly how it feels. Taqla, is it not obvious that I’ve been falling in love with you this whole time?’

She went still, her eyes widening.

He smiled lopsidedly because of his split lip. ‘I’ve been like a man sliding down a sand dune, trying to keep on my feet and all the time falling. Can’t you see that?’

She tried to speak but for once had no words. Not even when he bent his head and kissed her through her veil. She felt the warm softness of his lips on hers and the ghost of his breath through the silk. Her heart slammed painfully in her chest, sending the blood roaring through her head.

Quietly, while his lips still held hers, he let go of her wrists. One hand stayed to hold her close to him, but the other rose to touch her face through the folds of her headscarf. Then he drew back a little so he could look into her eyes. She could read his intent. She knew what he was going to do and the voices of warning were roaring in the back of her mind, but still she didn’t resist when he gently drew down the fold of her veil and bared her face.

I'm so glad I didn't stay up, the tension would have done for me. nice to wake up to the right president in the chair.

I didn't mean to stay up, but I got so anxious I couldn't walk away!
I'm paying for it today, mind!