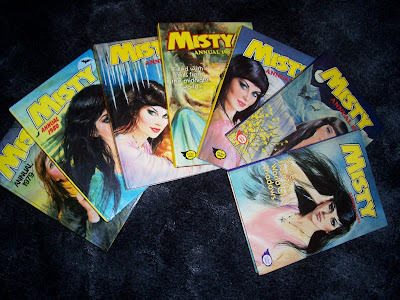 Does anyone but me remember Misty comic?

When I was but a bitty girl, me and my brother would be taken down every week to our judo class at the YMCA and afterwards we would have a drink in the cafe and be allowed to buy a comic each in the shop. My comic of choice was Misty, which was a horror/supernatural title aimed at girls (This was in the days before photo-stories killed all the imagination and art in girls' comics stone dead). The protagonists of the stories were usually in the 14-18 range (so I'm guessing the intended readership was kids around 10-12) and were usually lonely girls - there were a disproportionate number of orphans - who had to go to a new school or move to a new home or (if it had a Victorian setting) go live with a vile and scary male relative. Then something BAD and SPOOKY would happen: if the girl was innocent and nice she'd survive the supernatural onslaught, but if she was a nasty piece of work she'd end up HORRIBLY PUNISHED.

It scared the living crap out me, and I loved it. For years I couldn't turn the light off at night for fear of those stories replaying themselves in my head. 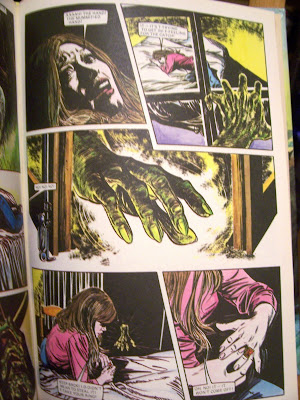 I've been buying the annuals recently on eBay. They're not nearly as scary as I remember, funnily enough - but fascinating and fun. There's a big emphasis on bullying at school, I notice these days (and they're single-sex schools: boys barely feature, so the villains are inevitably female). In between the graphic and text stories are articles on superstition, folklore, horror actors, mythic creatures and witches. Witches are cool. It's occultism for tweenagers.

Here's a page that illustrates Misty at its best. Sorry for the crap quality of the photo - we did spend an hour last night failing to get the scanner to work - but it should expand if clicked. 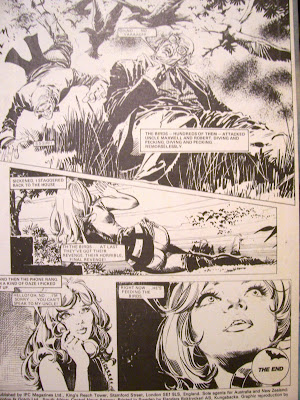 This one above epitomises everything that I found so fascinating at that age. It's gloriously moral - the wicked vivisector meets with an uncanny vengeful death. It's got a macabre wit ("Right now ... he's feeding the birds."). And hey - look at that bum!

I think we're spotting a major influence on the Ashbless career right here.
Posted by Janine Ashbless at 10:35

Email ThisBlogThis!Share to TwitterShare to FacebookShare to Pinterest
Labels: comics

Hahaha! They look great! I used to love all those horror stories as a kid, where the baddie always got the hideous punishment. But my faves were these thin little books about games of death chess and evil witches.

The baddie would commit some terribly minor transgression, usually, like stealing a 1p sweet. And then they'd be boiled alive in a pit of acid and snakes.

Those were the days when kids really knew right from wrong, eh?
;-)

Funny how going back in time, those things that influenced us look so different. I love the artwork in these comics.

I had a friend whose dad owned a comic shop and he used to find the oddball artsy ones for me.
I've never seen 'Misty' before tho - lovely pictures!

I shall go before I start ranting about the insipid pink tide that threatens the girls of today ...

Oh, don't get me started Nikki. Everything colour-coded Barbie Pink for girls (and whose godamn idea was that??? It's f***ing gender-apartheid) should be put in a big heap and burned.

I love the artwork in Misty too. apparently some of the writers and artists went on to comics like 2000AD. And without realising, I followed them!