I'm back from holiday in Syria and Jordan - unscathed and without hassle, no thanks to the bloody American military - and here's the photo to prove I really was there! 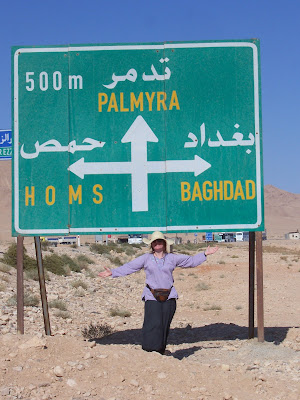 I'm going to post a few holiday snaps over the next few days, starting with Syria, which is a country with so much archaeology you can hardly move for prehistoric and Classical remains. They've got a lot of desert too, which is as flat as a pancake for the most part. 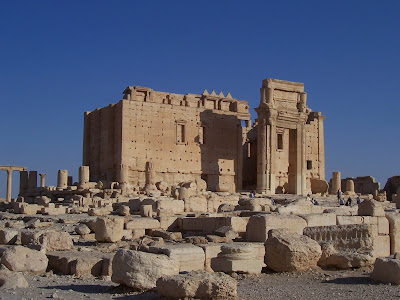 Here's the Temple of Ba'al at Palmyra. Ba'al was a god who got a really bad press in the Bible, but he's a fertility and sex deity and therefore Of Interest To Me. 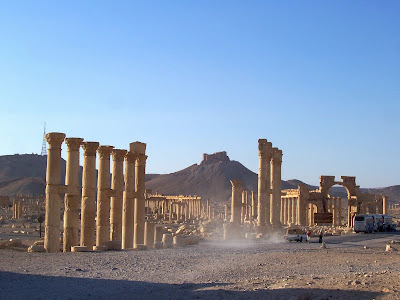 And here's a general view of the ruins of Palmyra, the oasis-city. Isn't it beautiful? This location was just awesome, and we climbed to the fortress you can see on the hill there for our view of the city as the sun set. Magical.

I really liked Syria, and would love to return one day. The people were friendly and laid back - there was little of the hassle you get in some Middle Eastern countries where you are just a magnet for traders. It was really cheap, which matters when you're on a budget. We could wander about at night on our own and feel safer than you would do back in the UK ... except when crossing the roads, mind. Non-Muslims are allowed to enter the mosques (something we couldn't do in Jordan, for example). There are plenty of women in evidence on the city streets. In case you're interested, most Syrian women wear a headscarf but not a veil, and modern clothes - a fair few go with hair uncovered too. There were quite a few heavily veiled women in Aleppo though - Shi'as rather than the majority Sunnis. What do they wear under all that black? Well, this apparently: 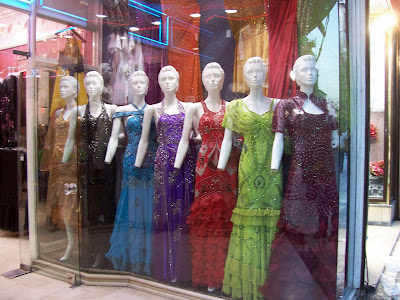 Seriously, the shop-windows of Aleppo were bulging with these sort of glamorous dresses. And really kinky underwear, which I'm sorry I never got a picture of! Women just can't get enough of sequins and swish, it seems - they just save it for the home.

And to strike a really low note (you would expect no less from me surely?) Syria seems to have an excess of strikingly beautiful young women and men. The incidence of eye-candy was astonishingly high - again, not something in evidence after we crossed the border.

The group tour we went on was run by Exodus, by the way. They did a great job of organisation - we were whisked through diplomatic channels at Damascus airport for example - and our guides in both countries were qualified archaeologists.

Posted by Janine Ashbless at 15:14

Email ThisBlogThis!Share to TwitterShare to FacebookShare to Pinterest
Labels: Janine in the flesh, not working, travel