Coincidentally, two stories I've worked on this month - The Sorcerer's Apprentice and a Lovecraftian horror I'm doing under my other alias - have themes that overlap. Both are concerned with the folklore of sleep and nightmares. 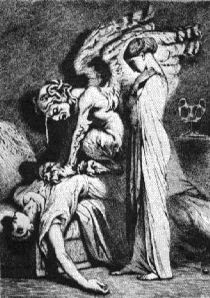 There is a well-known phenomenon called sleep paralysis, that has - all over the world - given rise to legends of monsters. Basically, when you are asleep your body becomes partially paralysed to stop you sleepwalking, talking out loud or otherwise acting out your dreams. Some people partially wake up while still in this state, and find they can't move or speak. What's more there is often the sensation of pressure on their chests (because they can't control their breathing muscles) and a sense of danger in the immediate vicinity. Dream imagery can continue even when the mind thinks it is wide awake, resulting in visual hallucinations of ghosts, demons or aliens looming over you, or even sitting on your chest. 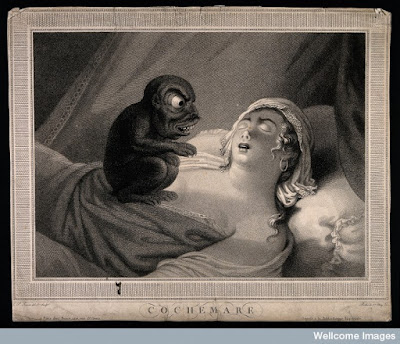 The most famous depiction in Western art of this is by Henry Fuseli:


It was such a masshoosively successful painting that he painted several different versions, with increasing floppy and bare-breasted women, to increase sales:


Fuseli's Nightmare has become so iconic that it was ripped off by artists, contemporary political satirists and then early photographers:

There are still many versions being created even today - just Google it if you dare. 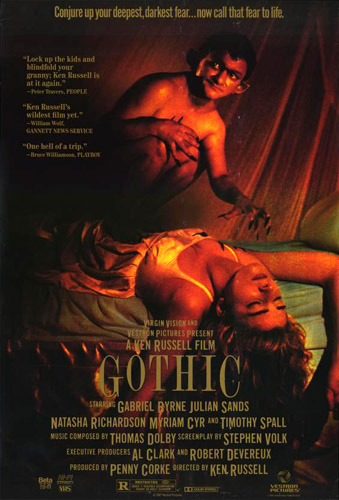 I suspect that it is also entirely Fuseli's fault that we connect the word "nightmare" with actual horses (thank you, Dungeons and Dragons, for that personal confusion). The "mare" bit actually derives from Mara, which is Old Norse name denoting that hag-like spirit who plagues people and livestock in the night. It has nothing to do with equines. 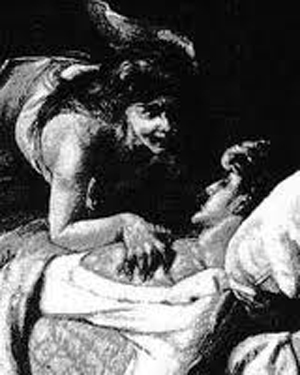 And yet there is Fuseli's horse sticking its nose in ... ! (Much play has been made by critics, btw, of the "phallic nature" of the horse's head, "thrusting through" the curtains. Because if a woman is having a bad dream then it must be about sex, I guess. Women in art have to be sexualised, because what else are they there for?)

Actually, it's pretty clear from another of Fuseli's pictures that the horse is there for the demon to make his getaway on:


That sort of robs the little git of a lot of his menace, I feel - he can't even disappear back to Hell under his own power! Maybe he gave up his job in embarrassment and made way for this sexier, scarier version:

Posted by Janine Ashbless at 19:02

For a while I had a recurring dream of having guns pointed at me through car windows, I'm ashamed to say.