Since it's Good Friday, it seems appropriate to share some of the wilder and weirder saint stories from Ethiopia. The country converted to Christianity waaaay back in the 4th Century, and has had time to develop a mythology peculiar to itself.

Their patron saint is good ol' George. But I'm going to save his astonishingly gruesome story for another day... 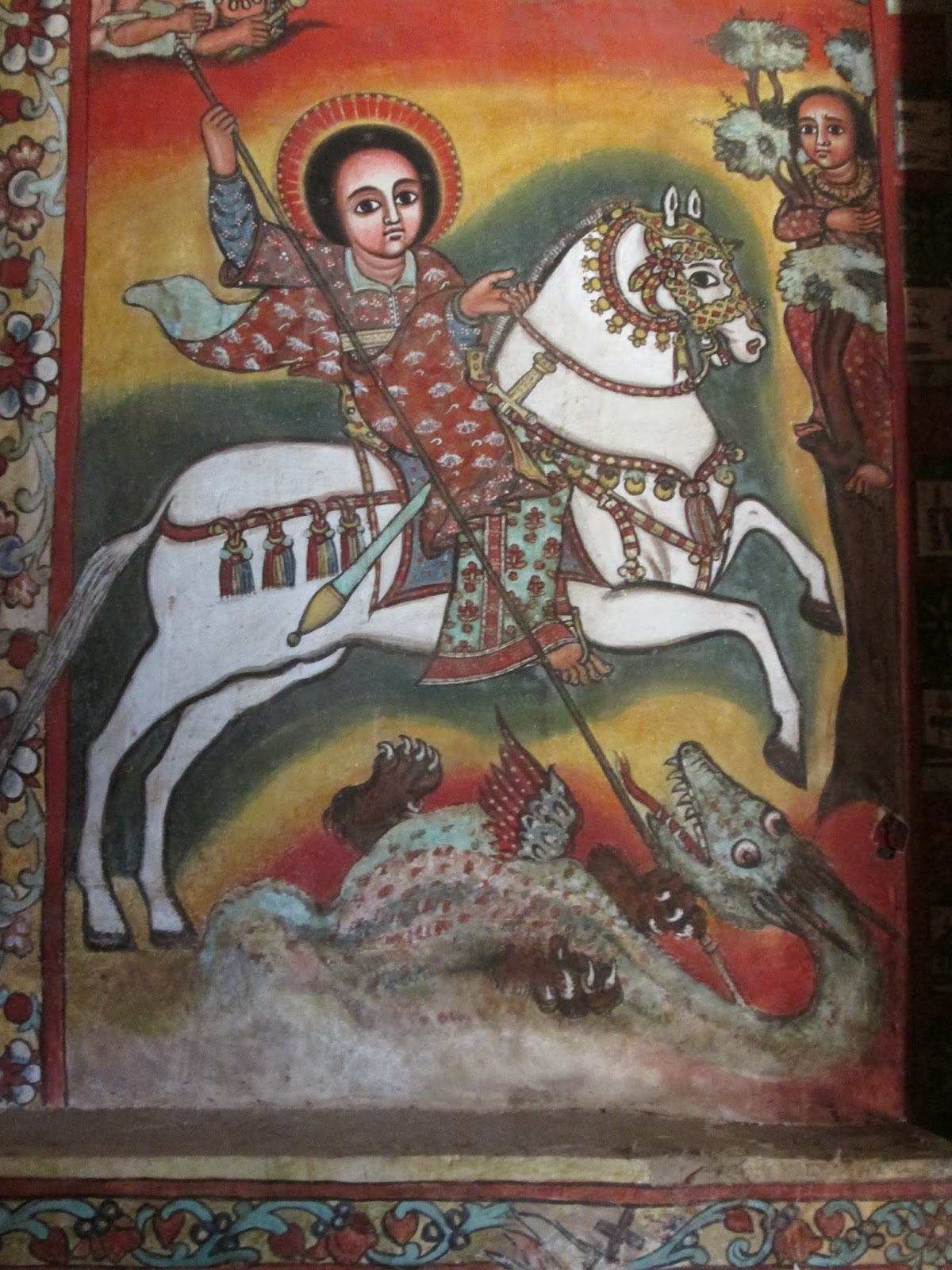 They venerate Mary (Maryam) in a big way too. Here she is beating the young Jesus for breaking a water jug.

When Mary died, they carried her body to be buried and an unbeliever tried to seize the body and throw it on the ground. Instantly an archangel turned up and cut off his hands!


This chap below is Belial the Cannibal. He wasn't a saint - he ate 72 people including his family! But he spared a leper because, ugh, he had standards when it came to cuisine. And what's more he gave the leper a cup of water to drink when begged in the name of Mary. Come his eventual death, St Michael was going to send him to Hell, but Mary put the cup of water into the divine scales and that small act of mercy in her name outweighed all the murders. Huzzah!


This chap surrounded by wild animals and wearing furs is not St Francis, but ﻿Gebre Manfas Kiddus, another animal lover. He once came across a bird dying of thirst and let it peck his eye to drink his tears. 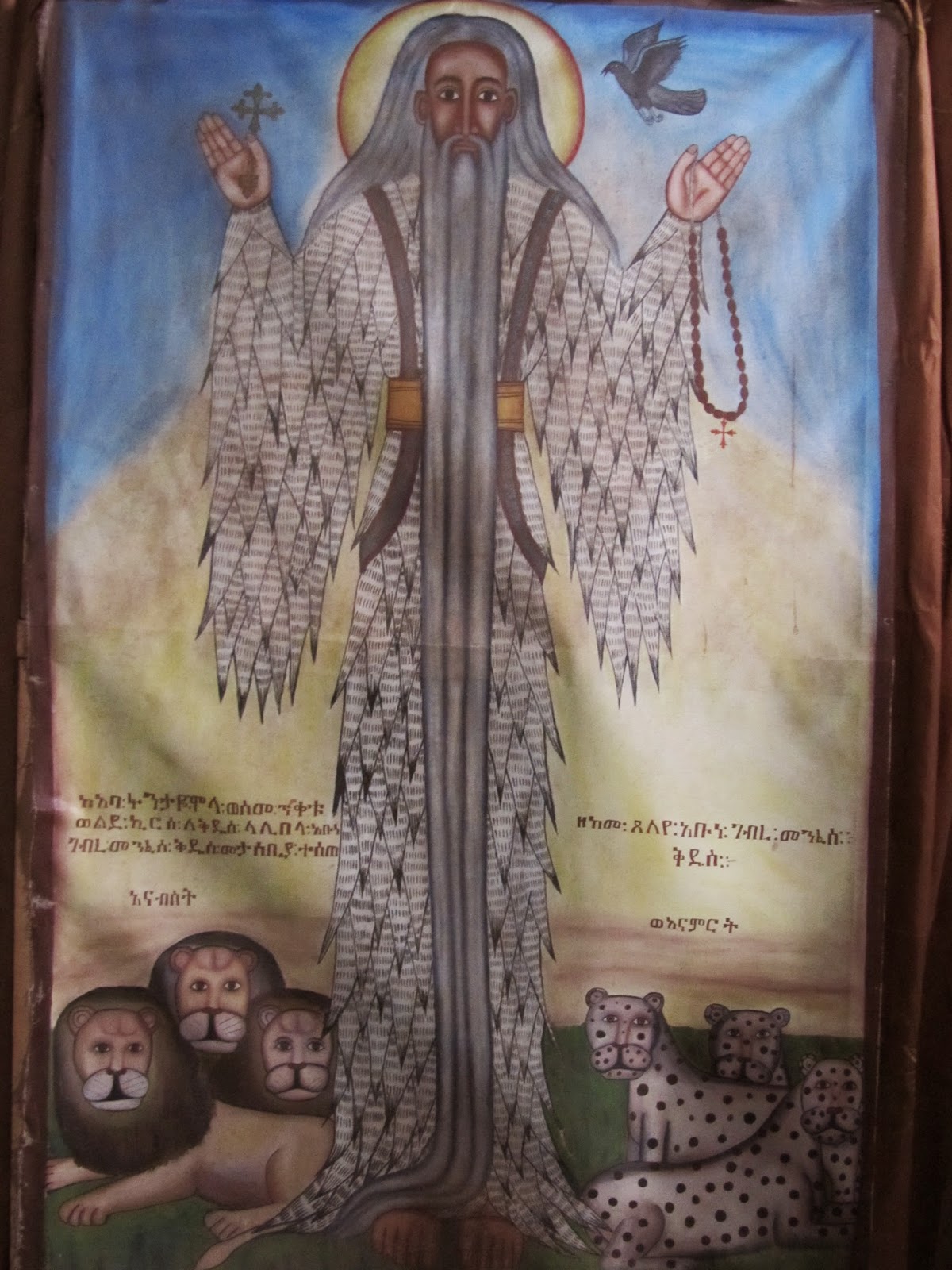 Not to be confused with fellow lion-saint Abuna Samuel, who was riding his mule one day when a lion jumped out and ate it. "Oy!" said Samuel: "I needed that mule!" "Oops, my bad," said the lion, and from then on it allowed the saint to ride it on his missionary journeys. 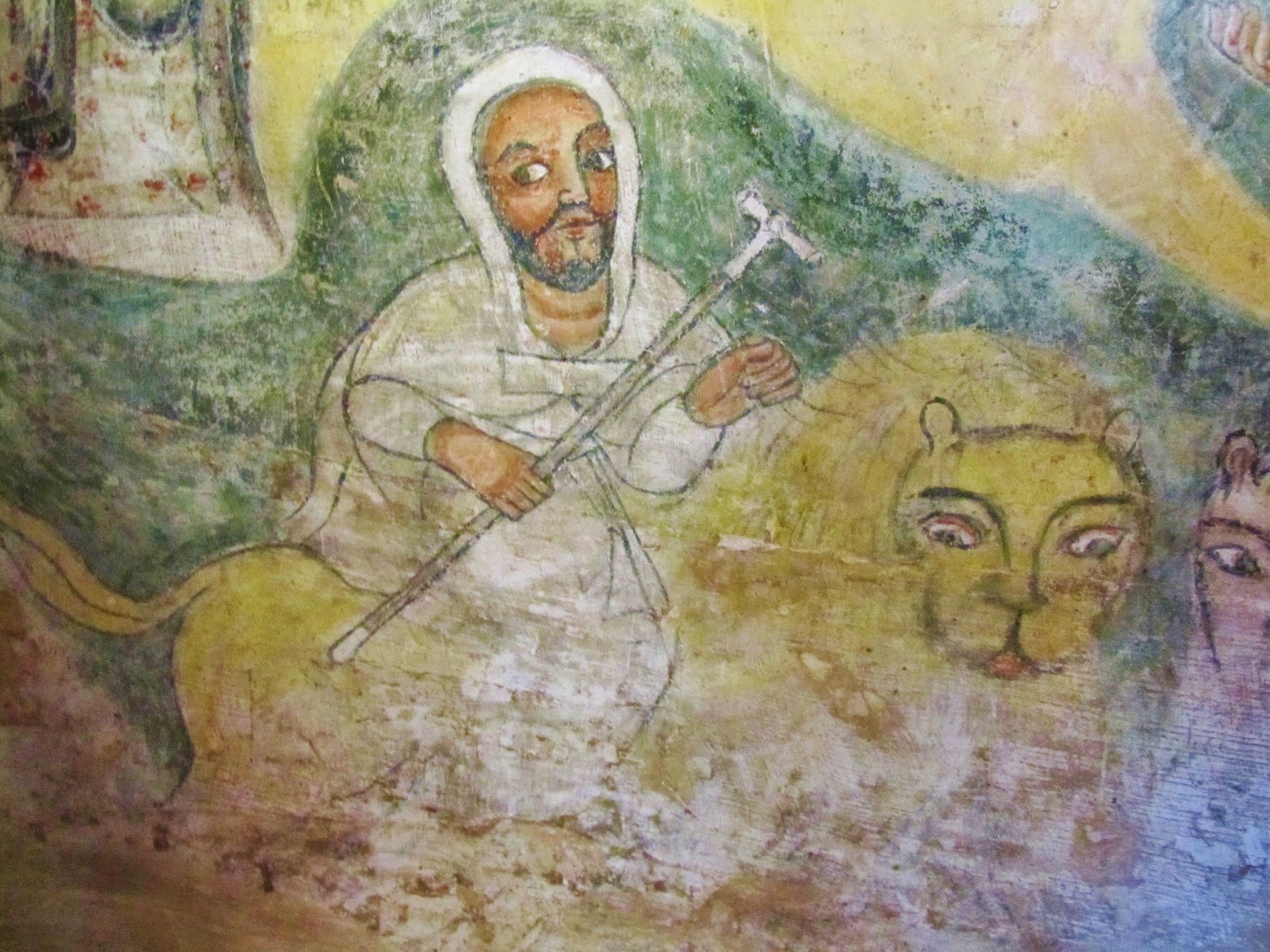 St Gebre Kristos was a prince who gave up all his wealth to live as a pious beggar. When he wandered home, he was such a mess only his dogs recognised him. 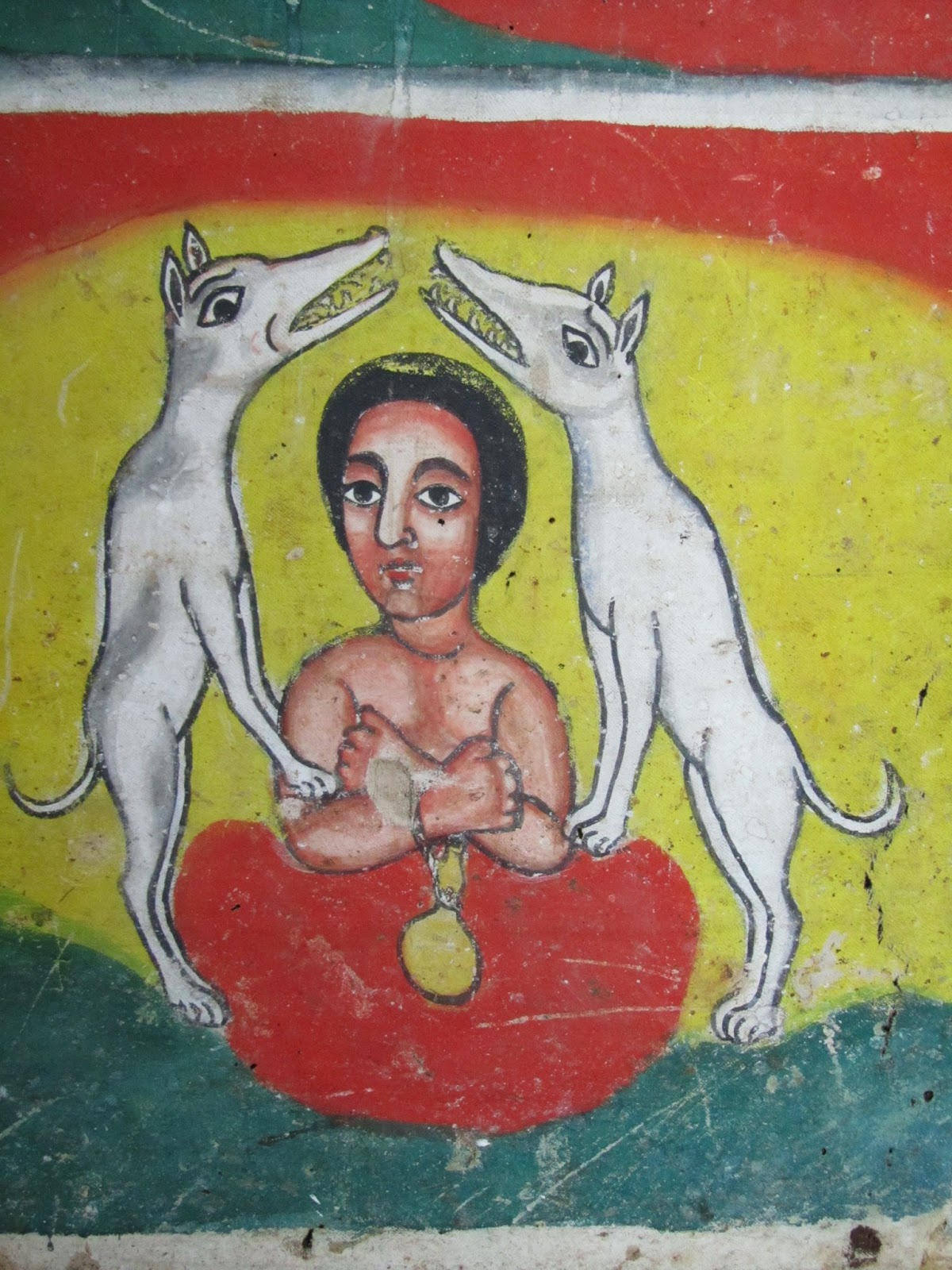 Now we start getting REALLY weird. This is St Bula, who lived up a tree. Every time he thought of the Passion of Christ, he was so overcome he would throw himself out onto a bunch of spikes.


And this is the very popular St Tekla Haymanot, who stood up without a break for 22 years praying (surrounded by spikes to stop him nodding off and falling over). Eventually his right leg went rotten and fell off! Not letting a minor inconvenience like that cramp his style, he stood on one leg for a further seven years until that one fell off too ... at which point God granted him wings to reward his mind-boggling stubbornness. 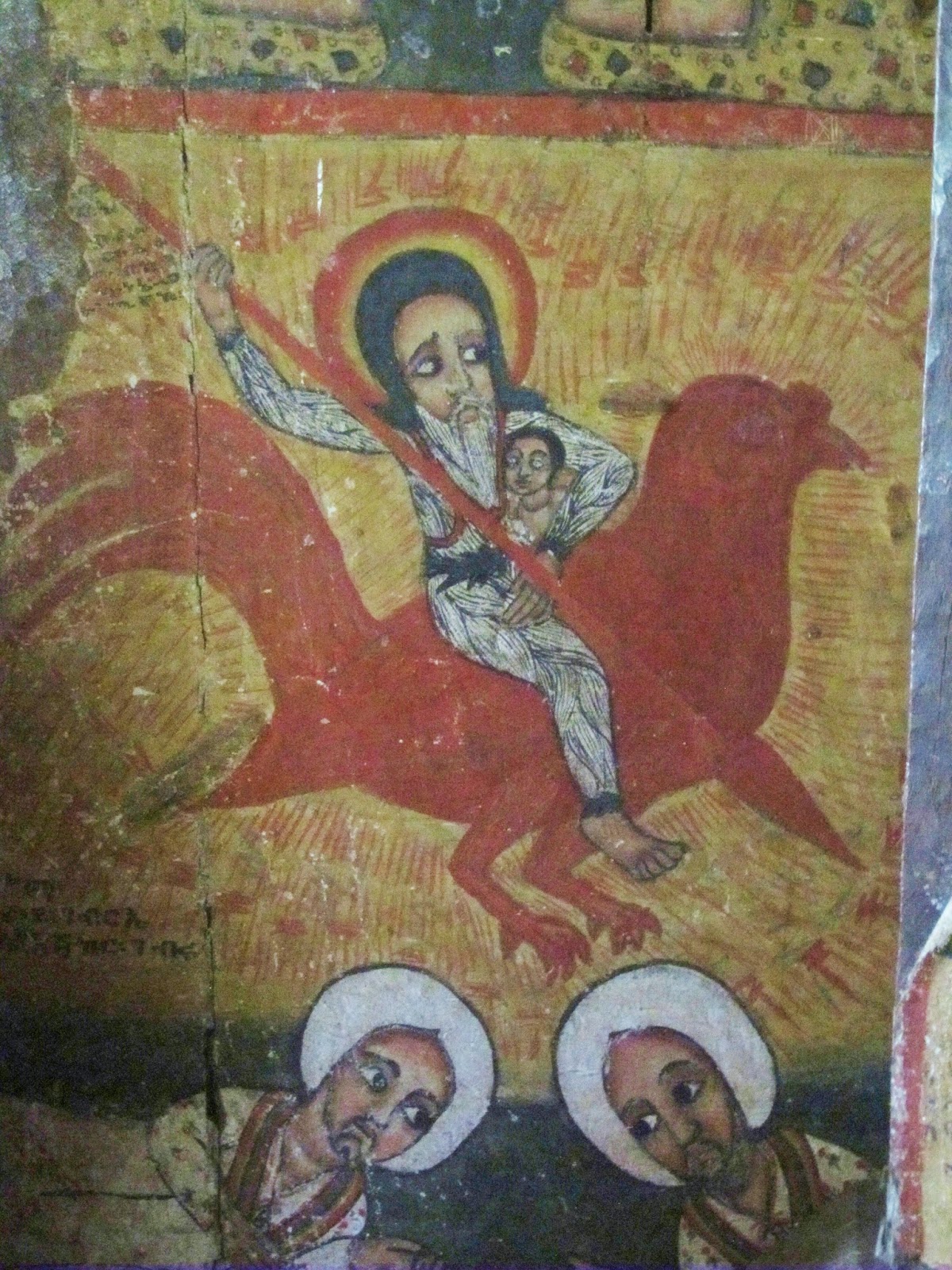 But THIS is possibly my favourite saint in the entire world. This is Kristos Samra, a woman who let being reasonable and rational go to her head. First of all, she went up to Heaven to petition God. "Look, Lord," she said; "Why don't you just forgive Satan and all the sinners so we can close down Hell and stop all this suffering?" "NO WAY," said God. "I WON'T FORGIVE SATAN UNLESS HE SAYS SORRY FIRST." So Kristos Samra went down to Hell and said to the devil, "Look, why don't you stop being an arse and just say you're sorry, so that no one has to burn in Hell anymore?" But Satan refused to humble himself - and what's more he grabbed hold of Kristos Samra and tried to drag her into the flames. Luckily the archangel Raphael was keeping an eye on her and he rushed in to the rescue. Let that be a lesson to any Christians who try to be reasonable! 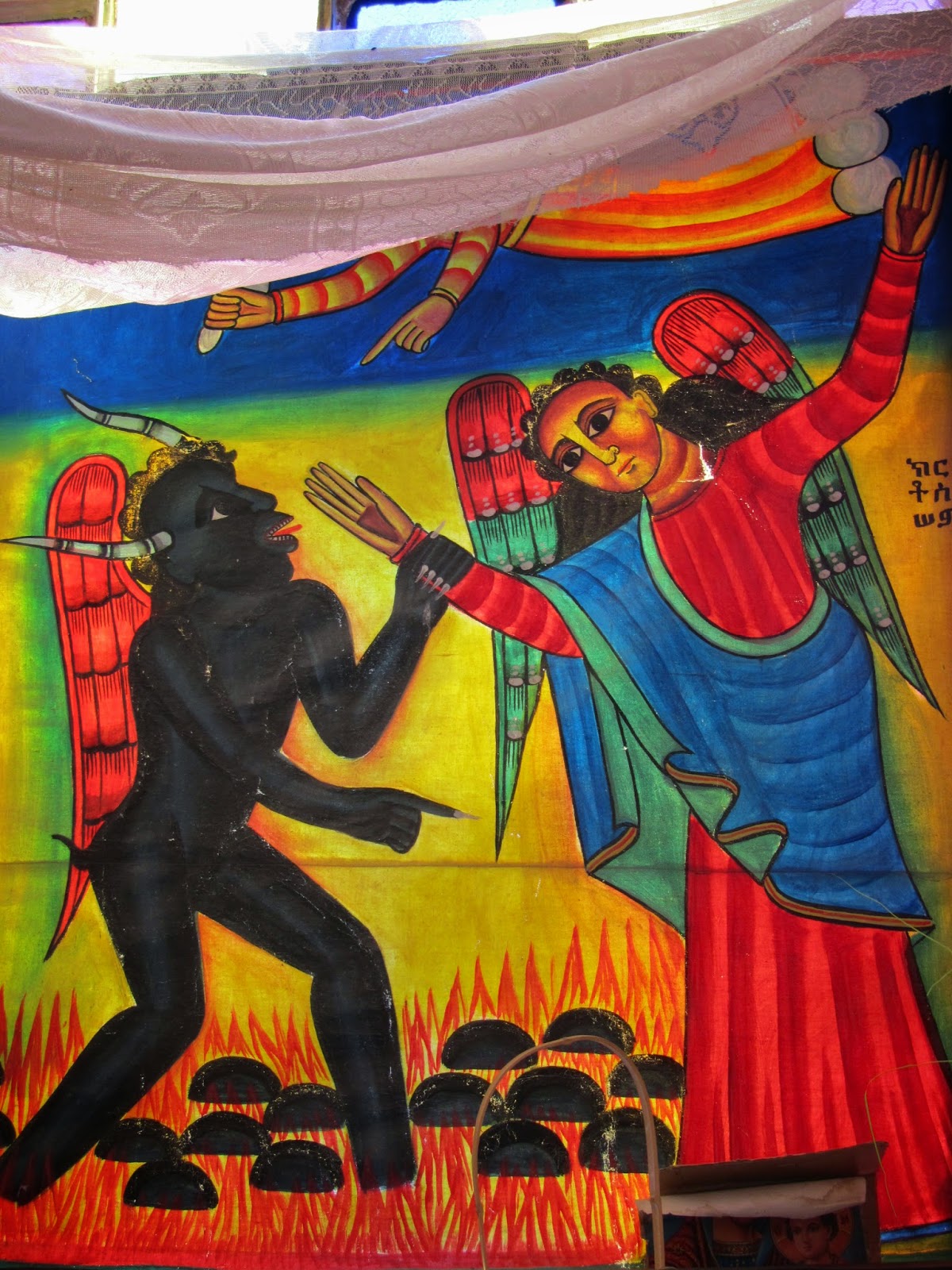 There's much more about Ethiopian saint stories here if you want to wade through, but don't forget to arrange for rescue... :-)

Posted by Janine Ashbless at 21:22

The human race is crap and ridiculous. Not to mention insane.