Every Monday I post a naughty excerpt for your entertainment.


Love Lies Bleeding is my short story contribution to Fifty Shades of Green, (ed Cheri Colburn) the new gardening-themed erotica anthology from Greenwoman Publishing. It's slighty more restrained than some of my erotica, but like - it turns out! - several other contributions to the collection, it is a supernatural tale...


What was I talking about? Ah, yes. Him.

He is restoring the grounds around my house. Spring sunlight, returning to earth long shadowed, has resulted in an unexpected treasury of flowers along the margins of the old rides: stunted narcissi and crocuses early in the year, and a nervous carpet of bluebells following on in May. The warmth of the season reveals more of him too. Working mostly alone here, in an area of the gardens long closed off, he sheds his shirt when the weather allows it and labors bare-chested, golden and ruddy. Freckles bloom like tiny flowers across his shoulders, more and more each day, and tiny flecks of soil and cut grass and dry leaves stick to his glistening skin, a patina that makes him scratch pleasurably whenever he pauses to ease his muscles.

Papa would not approve of that either. He always tried to shield me from such coarse sights, lest I be spoilt for any future husband. But it is such a long time since Papa last came down here to visit me. I can't recall how long exactly … I wonder what he would say if he knew one of his workmen was toiling half-naked within sight of his daughter?

I watch, illicitly, feeling a thrill I had not known myself capable of.

His skin is golden, but his nipples are flat and brown, and blondish hair marches down across his chest and belly like an army converging upon the narrower pass beyond his hips. When he is working hard his shoulders are glossy with sweat and droplets run down the declivity of his spine and slip beneath the waistband of his trousers. I want to follow them with my fingers. I want to bite his chest and feel his hot hard flesh beneath my hands. I want to feel the life burning beneath his skin, to press my lips to that fire, to taste it on my tongue.

He shines. He shines. In my world of shadows and stillness, he glows like a burning lamp. He summons me.

He is digging a new flowerbed on the southern approach to my home, and I cannot tear my eyes away. But I cannot make myself known.

Once, greatly daring, I did come out while he was here. My desire was so fierce that day that I could not resist the lure. He'd been laboring all morning a little way off from the house, where the woodland understory was still thick. Maybe he glimpsed my presence at the corner of his eyes, because he would pause and glance about himself occasionally, frowning into the depths of the grove. But he never truly saw me. Resting after his lunch in a cleared dell, he dozed off for a moment, I think, in a patch of sun. I crept in closer under the dense cover of the rhododendrons. There he lay in his open shirt, one arm tucked behind his head to pillow it. His face was peaceful in repose, his lashes long and silky. That broad chest of his rose and fell mesmerically. Beyond the crest of his ribcage, his torso sloped down to the shallower flatland of his stomach, a vulnerable stretch that seemed to crave the touch of my hand. I was close enough to hear his gentle breathing, to smell his sweat, to feel the heat of his blood like a furnace on my face. Almost close enough to reach out to him. My lust for him was an ache bone-deep.

But he lay in sunlight. I was confined to my shadows.

Almost as if he felt my gaze upon him in his shallow dreams—and perhaps he did—he woke up abruptly and sat up shivering and looking around him. In my hiding place amongst the dark and glossy leaves, I froze.

Did I want him to see me? The answer is, I do not know. I have been ill so long, and there are no mirrors in my house. I am no longer entirely sure that I look like the pretty girl I used to be, all ringlets and wide eyes and blossoming maidenly curves. I think I must be pitifully frail and slender now. I don't eat much these days. My appetite comes and goes.

I like to watch when he goes off to empty his bladder against the bole of some tree. There is sometime exquisitely masculine about the way he stands; the insouciant tilt of his hips; the brace of his legs; the satisfied little bounce he gives as he readjusts his clothing afterward.

He's in the prime of his youth, and male, and working alone. I can see the low burn of the fire that's in his flesh, always. It must be hard to ignore the imperative itch of his potency. That weight he carries between his thighs. I imagine it is burdensome at times. And I sympathize, because my own need is just as cruel.

Sometimes I see it become too uncomfortable for him to ignore. Then he sets his back to a tree and parts his clothes and stretches taut, milking the seed from his heavy stones with swift, grateful movements. I see it. I see it all. It makes me writhe—not with the shame suited to my maiden state, but with a desire so overwhelming that it can only be felt as hunger, and with envy. Envy of his touch on his own body where mine should be. His hand is brutal in its action, and I wonder if he would treat a woman so forcefully. My curiosity is like a sickness all of its own.

I wonder what it would have been like to be married to a man like him, to know the trials and pleasures of a woman's marital duties.

But of course I would not have married a man like him—a mere gardener—if I had been well enough to wed. I would have married a fine gentleman, my social equal. Someone with a grand country estate and a house in town, and ten thousand pounds a year to his name. Not a dirty, unshaven, sweaty gardener whose work-hardened forearms are dusted with sun-bleached hair. Whose callused hands would maul shamelessly my white virginal skin. Whose disrespectful eyes and casual coarseness and sense of humor would make a scullery maid blush.

He likes the grieving caryatids that flank the stairs to my front door. Pillars in the form of half-draped Grecian women, they hold up the lintel of the veranda that circles my abode, their stony faces solemn and their busts jutting and matronly. When he won his way through the shrubbery, that very first time, the first thing he did was to reach up and fondle the lichened breast of the one on the left, and grin. So pleased with himself.

It has become a ritual; every day he comes up here with his tools, and before starting work he gives both caryatids a grope, rubbing their stone breasts. If he's in a particularly cheerful mood he might jump up on one of their stone pedestals and embrace one from behind for a private joke, his hands cupping that stone bosom, his crotch bumping her unyielding buttocks.

Watching him through the crack between the double doors, I would give anything to be that caryatid, then. But all I do is watch. 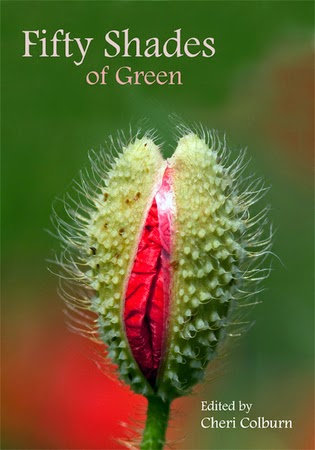 Love Lies Bleeding is available as a single download from Amazon US : Amazon UK

Or you can buy the whole anthology (including a very naughty F/m tale from fellow Yorkshire writer Slave Nano!) in paperback or e-format instead:
Amazon US : Amazon UK
Posted by Janine Ashbless at 16:29