Every Monday I post a filthy excerpt for your entertainment!

Today's guest is LN Bey with an excerpt from her brand-new, literally-just-released-this-second novel Blue 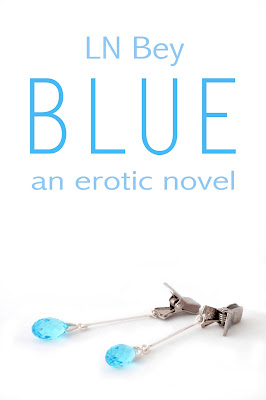 As her guests arrive for dinner, Janet is both aroused and fearful—because this is no ordinary suburban dinner party. Recently divorced and looking for something new, Janet finds it when her friend Jon invites her to join an exclusive club of kinksters whose initiation is to be the host—and the entertainment.

So begins Janet’s odyssey into a kinky suburban underground she never dreamed existed: caterers who were once dominatrices; real estate agents and lawyers by day who make twisted, sexy art by night; a stunning but sadistic insurance analyst who owns an entire stable of slaves of her own.

Well-trained submissives are in short supply out here in the ‘burbs, and Janet, blue-eyed and eager, has just the potential these people are looking for.


Everyone was just staring.

But she didn’t know what to do. Jack beckoned her with his finger. Janet crawled toward him, a lump in her throat.

“Have you been trained to show respect?” he asked when she reached him.

“She was told!” Jon protested.

“Can you figure it out for yourself?”

Janet hesitated, but she could guess. She lowered her face to kiss his shoes. She heard a zipper.
When she raised herself up, his cock looked like a missile emerging from its silo—perfectly straight, incredibly smooth. Oooooh God. It had been well over a year since she’d last had one, and not very often for quite a while before then.

She glanced up at his face.

“What are you waitin’ for, darlin’?” Jack said. “An embossed invitation?”

Janet licked her lips, leaned forward on her hands and knees, and took the cock into her mouth. She moaned at the sensation of it filling her mouth, and she held it there, savoring it, tasting it. Man, she thought. Male. A man freshly showered but driving here in warm weather. She felt a surge of pure, primal lust. She slid her tongue up and down it inside her mouth, feeling every feature of its smooth, warm surface. Jack inhaled sharply. She backed off, and swirled her tongue around the cock’s head—feeling its firm ridge and licking the very tip, slick with pre-come.

For the first time all evening, she was no longer embarrassed. She thrust her head downward, taking as much in as she could, moaning again as its hardness nearly filled her throat. She considered how she must look to the others, down on her hands and knees, head bobbing up and down, red ass up in the air, and it now thrilled her. This was what she was wanting, when she’d listened to Jon’s idea weeks ago. Slave-girl-in-castle, slave-girl-in-mansion, slave-girl-on-pirate ship, she’d read them all—and never mind all the submissive-to-a-billionaire stories. If this was what it was to be put in her place, to be a sub, she was all for it. She could feel her own wetness and she spread her knees apart, wishing Jon or whoever would move behind her.

Okay, maybe never mind about that slave girl thing. Janet stopped, and looked up at Jack’s face with his dick still in her mouth—You’re not going to let her, are you? her eyes pleaded, but his expression was quite different.

“Couldn’t agree more,” he said, grinning and watching her intently. Janet lowered her lips down the cock again, and swore it had firmed up even harder.

The crack of the whip was a complete surprise; she hadn’t heard Carolyn move. Janet screamed, her cry muffled by Jack’s cock, and it took everything she had not to pull away from it—but she had the feeling doing so would make things worse. She looked up at Jack, who watched her with fascination. Begging him with her eyes wasn’t going to work, apparently.

Carolyn whipped her again, causing her to moan, her mouth still filled. She hesitated once more from the pure, painful surprise of it, but only for an instant. What had she been expecting, these last few weeks? Let’s face it, this was what she’d been picturing in her mind for tonight, what had got her all slippery sitting at work or trying to watch TV—being on her hands and knees, sucking a man, being whipped.

The next blow came quickly and Janet whimpered again, but did not stop or even slow her sucking. If anything, she sped up, worked harder. The fourth came after a long pause, Carolyn apparently making her wait for it, knowing that the anticipation could be as agonizing as the whip itself. Janet flinched when it came, but she did not ease up on the cock.

Carolyn swung three times in rapid succession across Janet’s ass, already hurting from the previous whipping, and once more against the tender backs of her thighs. Janet squealed, prodded to suck even faster at each blow. Carolyn whipped across her shoulders, which she did not expect. That seemed almost rude, though she didn’t know why.

But she remembered what Carolyn had said: she was being trained. To suck a cock while being whipped.

Okay then. She sucked furiously as the whip struck twice more across her back.

“You wanna trade places with her?” Jack said to Carolyn, and Carolyn struck her harder.

Jack moaned and leaned back in his seat. Carolyn whipped her again, and again, as Jack began moving his hips in perfect timing with her bobbing head, fucking her mouth. He grabbed her head on both sides, holding it in place, and with a loud and ecstatic groan he exploded into her. She continued sucking, head held still, as his hips slowed and he began thrusting in time with his ejaculations. Carolyn timed her lashes with his orgasm, each thrust into Janet’s mouth met with a stinging crack across her ass. Janet could only moan at each convulsion, partly out of what was becoming actual pain from Carolyn’s whip, and partly from the shear subservience she felt each time Jack’s cock penetrated her deeper, releasing its hot come into her throat. She let its salty taste dominate her.

Carolyn’s whipping stopped. Janet relaxed—as did Jack’s cock, softening until she could take it all in and bury her lips in his pubic hair. Carolyn returned to her chair and reclined back into it. Jack still held Janet in his hands, and he lifted her head as his dick flopped against his stomach. He smiled beatifically.

She expected him to say something grateful, but instead he turned her head toward Carolyn sitting in the chair next to his.

Posted by Janine Ashbless at 18:39