﻿﻿ ﻿﻿﻿ ﻿As you may have twigged, I'm on holiday at the moment. I've flown out to join friends in Italy ... and two of us are going to be going home the slow route - we're driving back to the UK! Frankly, given how much we're eating I really should be jogging the distance. But anyway, I'm taking a short break from the blog.
Back at the end of the month...ish. With pictures of tombs and who-knows-what else!
In the meantime you ought to be able to follow our trip over at Rae's Nomady. 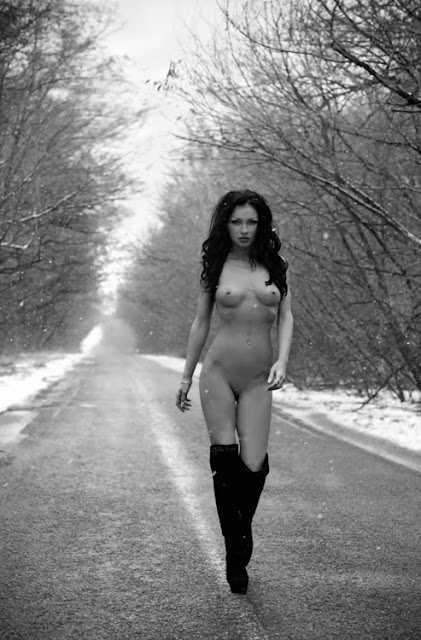 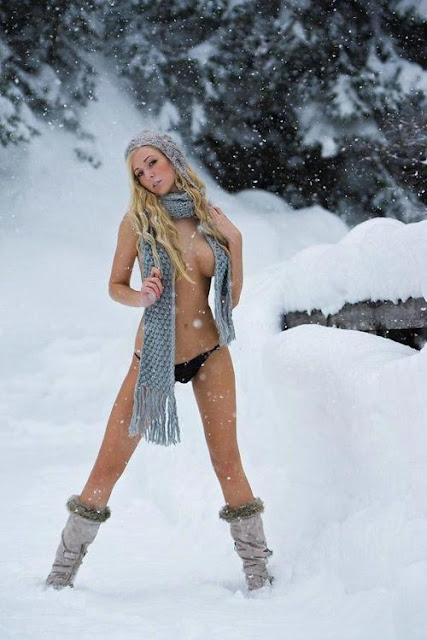 I'm interviewed at Black Hippie Chick today, by the way. This is the last stop on the Named and Shamed tour!
Posted by Janine Ashbless at 19:54 2 comments: 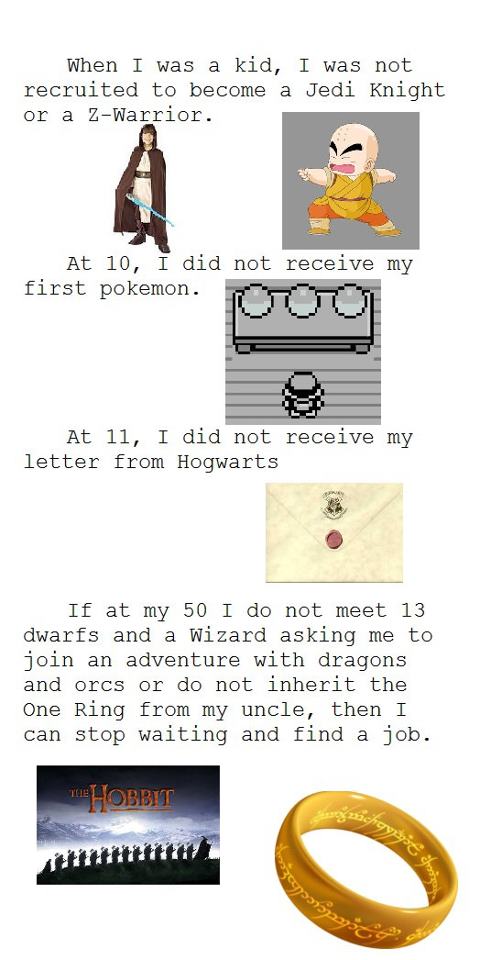 But meanwhile, at age 45, I went swimming in the Mediterranean this morning and I'm about to explore an Etruscan necropolis . . . so I can wait ;-)
Posted by Janine Ashbless at 13:08 2 comments: 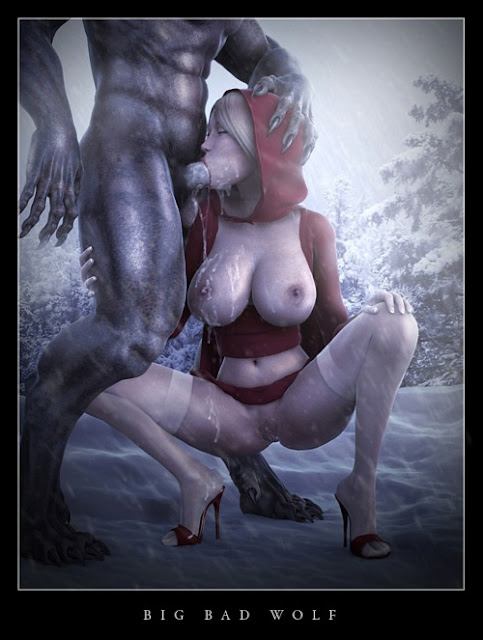 These Red Riding Hood pictures are just getting ruder . . .

Running a bit late today - I'm up a hill, on a macbook/dongle, being pursued by wolves and with no idea where I'm sleeping tonight ... ;-)

Not that that would stop Tansy, heroine of Named and Shamed and, according to Para Posse: "the Xena of Adult Fairy Tales."


How cool is that, eh? You can read the whole review here - Para Posse really enjoyed the book!


Thank you, Para Posse!
Posted by Janine Ashbless at 19:45 2 comments: 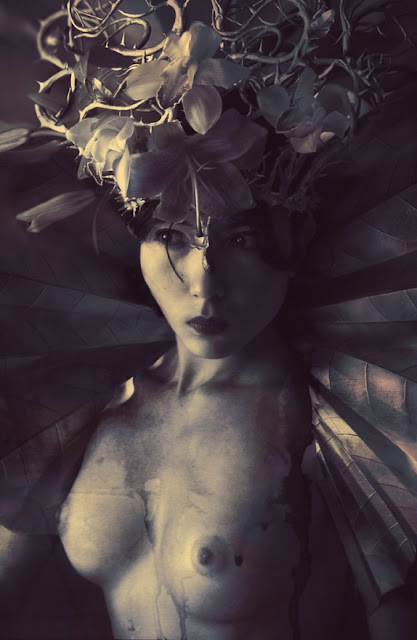 It's Day 7 of the Named and Shamed blog tour and I'm being interviewed over at Blood, Lust and Erotica. It's a fun interview - she describes N&S as "no holes barred" erotica, and she asks "If you were stranded on a desert island with four other people, fictional or real, who would they be and why?"

Talking of blood, lust and erotica  ...  my vampires have not been forgotten! Red Grow the Roses has garnered a fantastic review by Kathleen Bradeen over at Erotica Revealed: 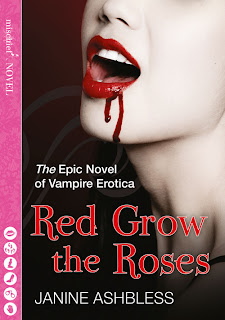 "I thought I was done with the whole vampire thing, but Janine Ashbless writes compelling stories that explore the essence of human nature, even among the fanged."

Full review here.
Erotica Revealed can be a hard audience to please. But she even liked the mosaic novel structure!

Thank you Vampirique Dezire and Kathleen!
Posted by Janine Ashbless at 08:45 No comments: 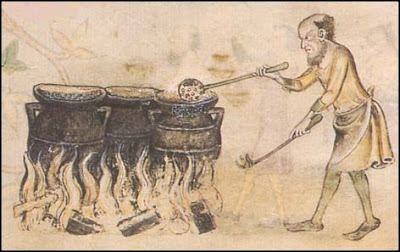 I can say "indeed" because I've been LARPing, btw. In fact it's more or less compulsory. I've been cooking my annual medivalishy feast, and I'm going to share the recipe for Beer and Cheese Soup that we served as the first course. I think it tastes great- hearty and creamy and moreish, but you do really have to like the taste of beer.

Be careful with the beer if you try this. It gives the dish a distinctly bitter aftertaste, so don't sling the whole bottle in without testing.

Eat with good bread and butter.
Posted by Janine Ashbless at 09:30 6 comments:

Email ThisBlogThis!Share to TwitterShare to FacebookShare to Pinterest
Labels: not working, recipe

I've got an interview up at Satin's Bookish Corner today ("What's the biggest secret you have ever kept?") - The text colours are truly eye-watering even if my answers aren't.

And now I want to rave about Brian Froud! Most of the fairy artwork I admire comes from the Golden Age of Illustration - that's getting on for a hundred years ago now. But Brian Froud  (who was heavily influenced by Rackham et al) is still alive and kicking, and so are his goblins. He's the mastermind behind the visuals of The Dark Crystal movie: 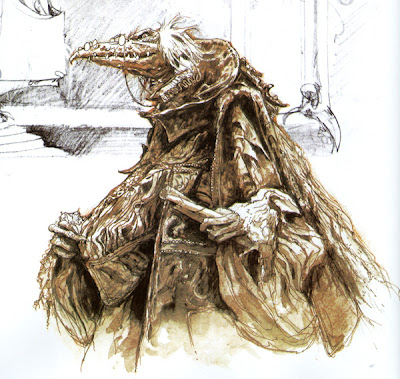 And Labyrinth, which is still one of my favourite films ever: 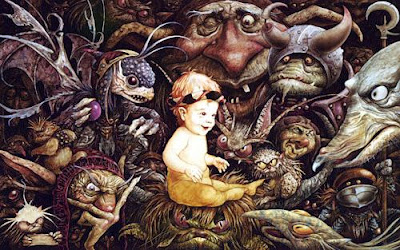 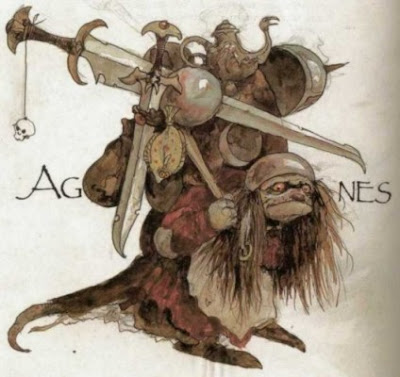 His goblins can be charming, but there's a streak of anarchic black humour even to his cutsiness - he produced Lady Cottington's Pressed Fairy Book, which was entirely full of, well . . . squished fairy corpses. 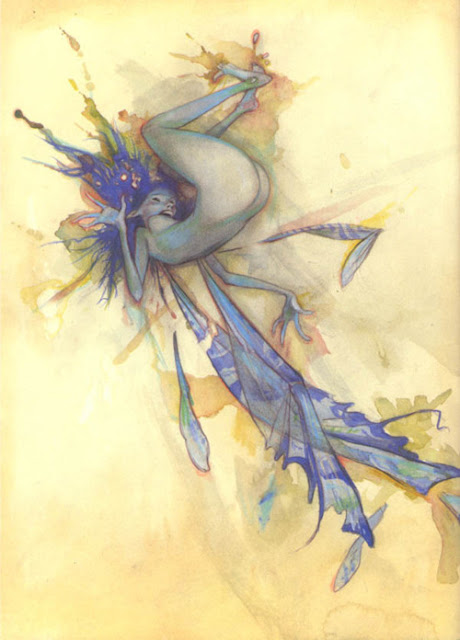 His grotesques are weirdly convincing, as if drawn from life ... 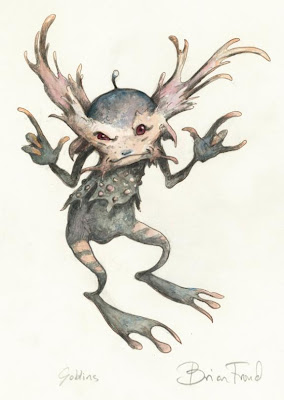 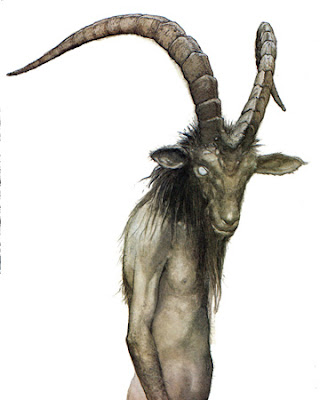 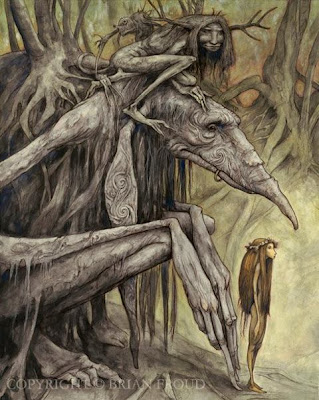 And when he wants to do beautiful and sensual, oh boy can he do that! 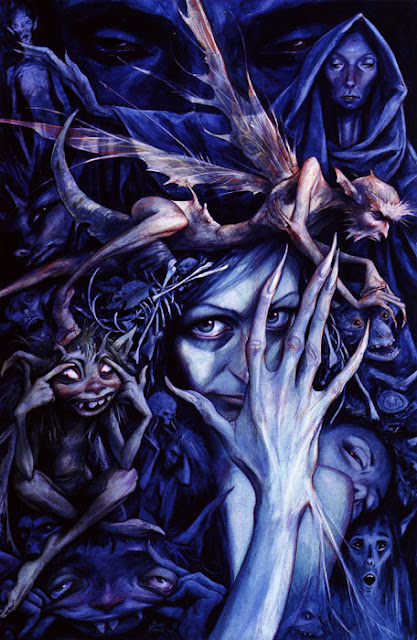 And yet it still has an otherwordly and menacing undercurrent ...
From his books Faeries:

"And here we must make one thing very clear. The real faerie experience is very diffrent from the general view of faerie built up by clouds of sentimental fiction with legions of inevitable happily-ever-after endings ...Faerie is a world of dark enchantments, of captivating beauty, of enormous ugliness, of callous superficiality, of humour, mischief, joy and inspiration, of terror, laughter, love and tragedy. It is far richer than fiction would generally lead one to believe and, beyond that, it is a world to enter with extreme caution, for of all things that faeries resent the most it is curious humans blundering about their private domains like so many ill-mannered tourists. So go softly-where the rewards are enchanting, the dangers are real." 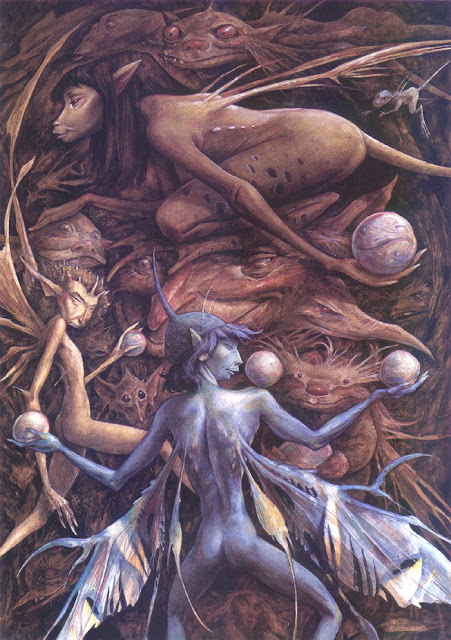 So I'll shut up and leave you with some pics that I find inspirational. And when I describe beautiful fairies in Named and Shamed, this is the sort of thing I'm thinking of. 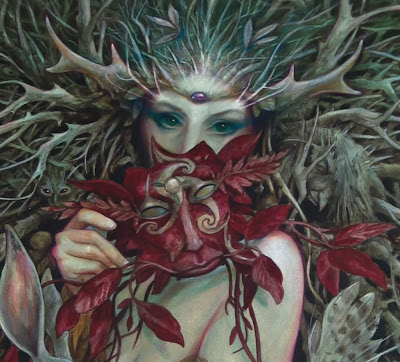 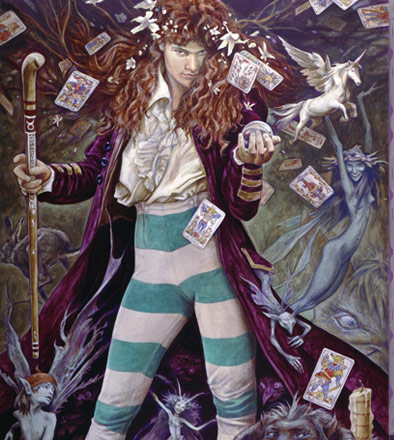 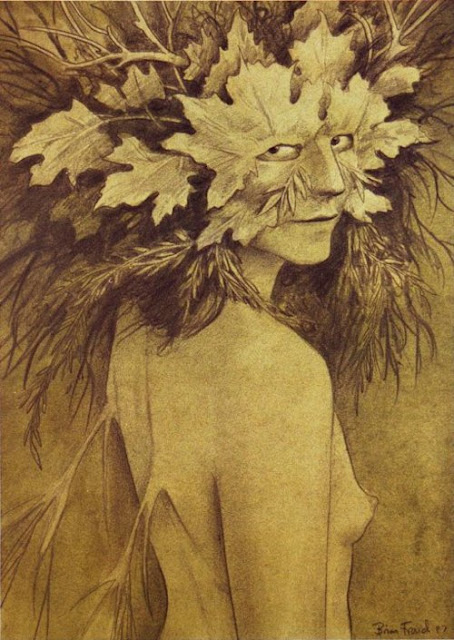 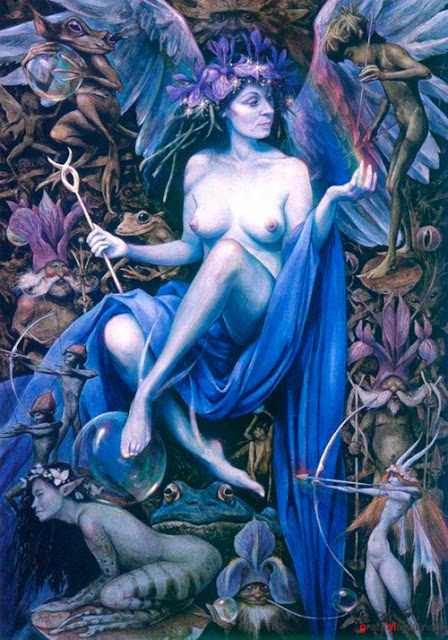 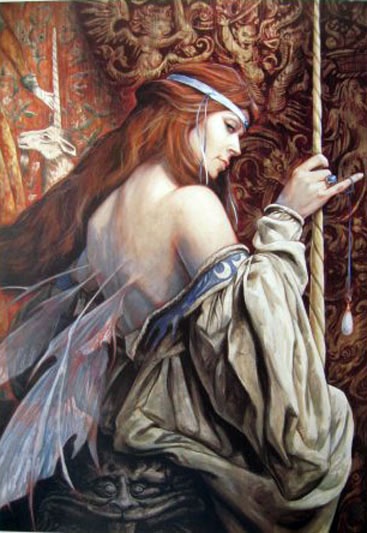 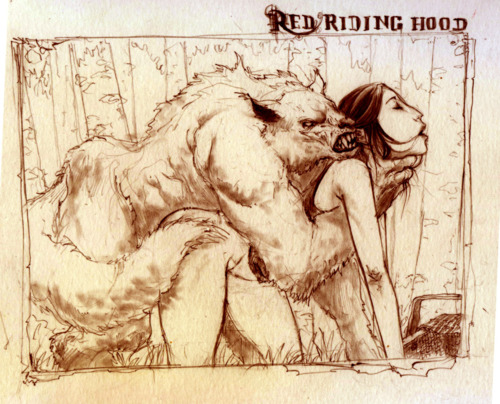 I'm totally smug about finding this pic for today, because not only does it allude to fairy tales for my Named and Shamed tour, it also is pertinent (in a metaphorical way) to my petplay short story Being His Bitch, which appears in Bound by Lust (ed. Shanna Germain).

Let's link to that one first - I've been over at Teresa Noelle Robert's place talking about the inspiration for the setting of Being His Bitch - which was the first time I went to a fetish club. Find out what it was like for a newbie! With a pic of me in costume! 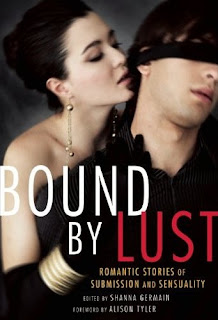 As for Named and Shamed ... I'm starting to get some reviews, and they're good 'uns! Books, Books and More Books has one up today, and says:

Thank you, Mindy and Jade!

Email ThisBlogThis!Share to TwitterShare to FacebookShare to Pinterest
Labels: art, Being His Bitch, internet, Named and Shamed, reviews 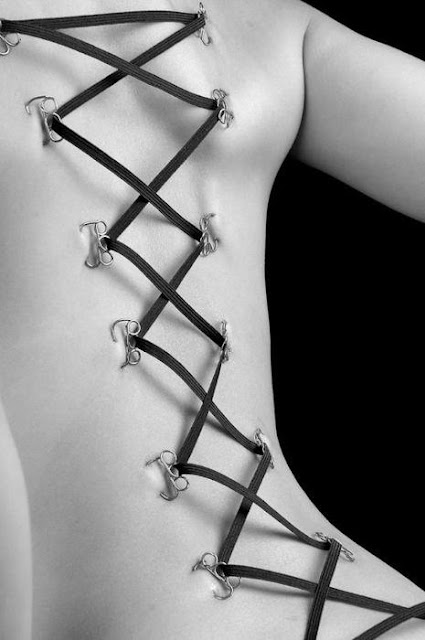 Ouchies! But beautiful! This has been a fantasy image in my head for some time. It makes me think of the cursed stays that the witch in Snow White used in an attempt to slay the heroine.

Meanwhile, it's the 4th day of my Named and Shamed blog tour, and I'm over at Kissing Velvet talking about naming characters - the power and the pitfalls.

"The E in E L Blakey: antiques bought and sold stood for Edmund, of all things. I didn't think anyone was called Edmund these days, but it suited him."
Posted by Janine Ashbless at 11:33 2 comments: