First, I’d like to thank Janine for allowing me to bring my blog tour here today. This is day seven of the blog tour and I’m very excited because I’ve written a really fun horror novel and I want to tell you a little bit about it.

(I’ll be honest and admit I’m introducing myself in the same way each day, in case these words encounter someone who doesn’t know me or who hasn’t been following the blog tour. If you’ve already read my introduction on one of the other blogs, or if you simply don’t care who I am or what I’ve got to say, skip to the bit under the picture of the book cover).

By way of introduction, I should begin by saying my name is Ashley Lister; I write horror fiction and some of the crudest poetry known to mankind; and I’m here talking about a horror novel I’ve written which will be published on August 22nd. It’s called Blackstone Towers and this is what the story is about:

The talismans of the magi control seven realms of the mortal world. One can grant the bearer immortality; another gives its owner unfathomable wealth; a third gives the holder unerring foresight. There is a talisman to control reality, success, the deliberate and the accidental, and a talisman that governs the balance between love and hate. The planets are now aligning, and one worldly resident of Blackstone Towers knows the talismans urgently need collecting and destroying before they fall into the wrong hands. The only problem is establishing whose hands are the wrong ones. 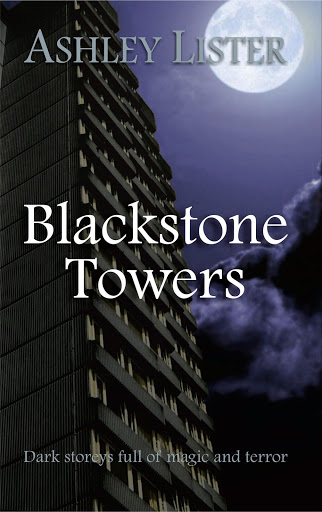 However, we don’t live in my ideal world so I’ll answer the popular question first: do I believe in ghosts?

The honest answer is: what time is it?

I’m writing this in daylight. I’ve got a portly dog on my lap and the soundtrack for Guardians of the Galaxy is playing in the background. Of course I know there’s no such thing as ghosts or the supernatural. If something does unexpectedly make a noise, the chances are that it’s the farty little dog on my lap.

However, tonight, I’d have a different response. I don’t believe in ghosts. But I also make sure I turn on every light in the house if I’m going for a late night pee. I used to work for a funeral director (I mentioned this earlier in the week) and I’m only just beginning to realise it probably wasn’t the best occupation for someone with my susceptible disposition. One night, and this was two in the morning night, I’d been called to drive the funeral director’s ambulance to a rural farmhouse.

It was very sad, as all deaths are. A relatively young man had passed away from cancer.
The funeral director had met me at the farmhouse and he helped me get the body into the back of the vehicle. And then I was expected to drive back through unlit and unfamiliar country roads, alone save for the dead body in the back of the ambulance.

I saw things on that journey home that could only have come from my imagination. As the promise of dawn crept toward the horizon, I saw the edges of the landscape shift as though it was a behemoth, uncurling and preparing to devour the tiny mortals that scurried over the earth.

I definitely didn’t hear anything in the back of the ambulance, scratching at the door that separated me and my travelling companion. I didn’t hear any strange sounds like that and I don’t still hear echoes of those sounds when I’m alone at home in the dark.

All of which is my way of building to my question for today: Do you believe in ghosts? And, if so, why? Answer below, if that’s easiest for you. I’ll be checking back throughout the day. Answer on Twitter if you prefer, using the hashtag #BlackstoneTowers. If you don’t use Twitter, and don’t like the comments box, please feel free to email me at me@ashleylister.co.uk. I’ll be collecting all the answers and, on the day of publication, I’ll chose my favourite response and send one lucky winner a free copy of one of my novels.

This is day 7 of a 9 day blog tour and, each day up to the launch, I’ll be on a different blog, as detailed below. And, each day, I’ll be asking a different question. Please feel free to follow me, answer as many questions as you like, and if you’ve got any questions about the book or anything else, I’ll be happy to answer.

Also, if you fancy coming to the online launch, where I’ll be reading from Blackstone Towers and sharing some of my ribald poetry, drop me an email and I’ll send you an invite. 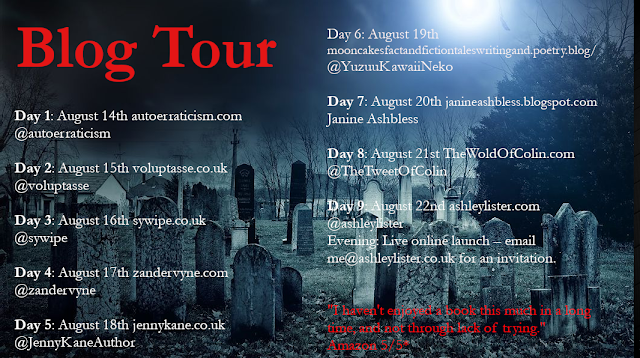 Thank you again to Janine Ashbless and to all you readers. I look forward to hearing what you’d do with the gift of foresight. And, if you want to pre-order a copy of Blackstone Towers, this link should take you through to the Amazon page
Posted by Janine Ashbless at 09:30 6 comments:

The version above, by the way, is the censored one. Full and filthy lyrics here:

And if you think any of this is new, Whores of Yore has an EPIC Twitter thread about blues lyrics by women in the 1920s and 30s that will make your jaw drop and your hair curl!

I got somethin' 'tween my legs  'll make a dead man come.

Say I fucked all night, and all the night before baby,

And I feel just like I wanna, fuck some more”.

All power to those wonderful women who fiercely own their sexual desire!  💖👿💖

Posted by Janine Ashbless at 20:12 No comments: