Jesus' Winkie and the Empress from the Brothel


I spent a day in Ravenna last month and I really have to share with you some of my pictures of the mosaics that make that Italian town famous! All over the city, in churches and sepulchres, are found the most incredible, detailed, glittering Byzantine mosaics. They're made of glass and gold, and these pictures cannot do justice to the colour saturation or the sheer bling of their visual effect.


This below is one of my favourites - and no, not just because of the cheery depiction of Jesus' tackle through the clear water! It's notable in these early artworks that Jesus is shown as young man, and beardless, instead of the iconic face we're used to nowadays. Love how the dove is spitting showering him with water from its beak. And that bearded, horned man on the left there ... he's the personification of the River Jordan, in old pagan style.
(Arians were NOT pagans, btw - it was a rival version of Christianity, similar in pretty much every way except that Jesus the Son was held not to be co-existent with God the Father, but a later and lesser entity. It makes intuitive sense after all: a son always appears on the scene after a father. But that also made it heresy. Arianism was wiped out and their churches co-opted as orthodox Catholic ones. Grumpy hero Herrick in my story The Scent of Hawthorn, is, incidentally, an Arian.)

But back to the mosaics ... and it's in the Basilica of San Vitale that we find two of the most interesting portraits in mosaic form. This ill-shaven, slightly sleazy-looking fellow is the Emperor Justinian I. 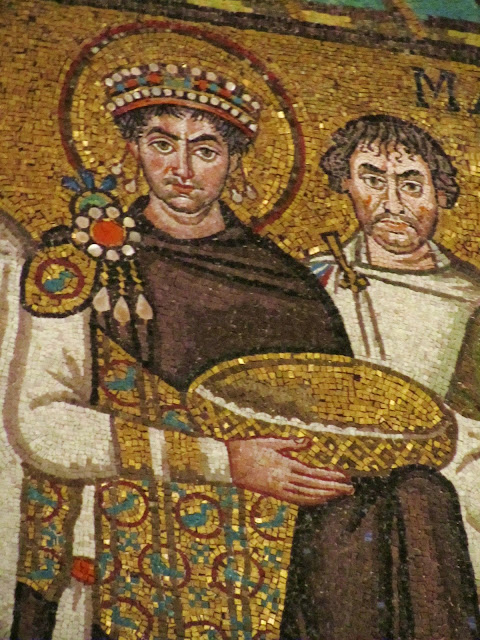 He was the one who really put the final boot into paganism and made Christianity the only religion you could get away with in the Eastern Roman Empire. Despite ethusiastically persecuting pagans, heretics and Samaritans, he had a reptutation for being pretty laid-back and tolerant in person ... at least in comparison to his wife, Theodora. Everyone knew, if you had to choose between annoying the Emperor or the Empress, it was far safer to piss the husband off.

This is Theodora, the Empress from the Brothel. 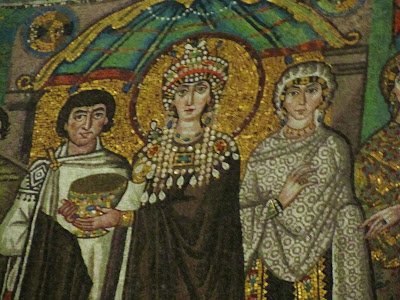 She was an extraordinary woman - ballsy, intelligent, ambitious and ruthless. She came from the gutter to become the most powerful woman in the world. She was a child prostitute and bawdy mime actress from a circus family in Constantinople. According to Procopius (who really had his snark on when writing his not-for-publication Super Sekret Diary) she entertained forty lovers a night, and complained only that nature had not endowed her with more than three orifices! Then she converted to God and clean living, and in her mid-twenties met Justinian, nephew of the emperor, and he fell so much in love with her that he got the laws changed to allow him to marry her.

And she was a heretic! Yes, the entire long length of their reign together (527-548 AD), they argued theology but she never gave in, and Justinian completely respected her. Despite the fact that her fellow Christian heretics* were being run out of town and killed by angry orthodox types, her loyalty was never in doubt - even when she directly interfered to thwart the Emperor's orthodox ambitons, and sheltered the heretics. She was the one who stood firm when the mob rose up in rebellion, and stopped Justinian fleeing the city. "Purple," she told him, "makes a fine shroud." (At her urging, Justinian stayed, sent the troops in instead, and massacred 30,000 people. It worked.)

It seems to have been a marriage of true soul-mates. He adored her.

Oh - and she got him to introduce a whole slew of laws protecting the rights of women to property, to guardianship of their own children, to not being forced into prostitution and so on. Under Justinian and Theodora the right of men to kill their adulterous wives was revoked (and a man could only kill his wife's lover if he gave written warning three times!!).

There's a good article on Theodora's life here.
And she's now a saint in the Eastern Orthodox Church. Which is pretty good going for someone who used to have geese peck corn off her pussy!

*She was a monophysite, believing that Jesus' nature was singular (divine) and not a mixture of human and divine. It's all just word-salad, honestly.

Posted by Janine Ashbless at 09:07

Have you read Guy Gavriel Kay's Sarantine Mosaic duology? It's loosely based on Justinian and Theodora's Constantinople and well worth a read, even if the first book is a little too episodic to be truly great.

No ... no I haven't. I can imagine the lifestory of Theodora making an AMAZING novel!

Theodora is not the main character of the books, but she's a pretty amazing secondary character.

Do give Kay a try. He's very good at turning history into fantasy. His 'Tigana' and 'The Lions of Al-Rassan' are among my all-time favourites. Both books have utterly delectable heroes!

I suppose it ought to be a trilogy with the volumes entitled "Whore", "Empress", "Saint".