Janine goes to the House of Lords

It started with an invitation: 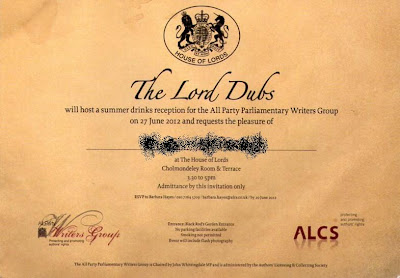 A summer drinks reception at the House of Lords - and I was invited.
*jaw drops*

No, it wasn't because the Peers of the Realm are huge fans of kinky sex ... perish the thought! I'm sure they're all as pure as the driven snow...
I actually got this because I'd been in a focus group for the Authors' Licensing and Collecting Society (which is an AWESOME organisation, and if you publish in the UK/Europe at all you really should join because it exists to GIVE YOU ROYALTIES). It's their 35th Birthday this year, and they were going to Parliament to lobby the government not to slacken the rules regarding copyright fees and suchlike.

I'm not a politcal lobbyist. I find it hard to speak to strangers. But the opportunity to see inside the House of Lords was too good to pass over - after all, I'm sure I could use the setting in a story one day!

So on a grey Wednesday I went to the Mother of Parliaments... 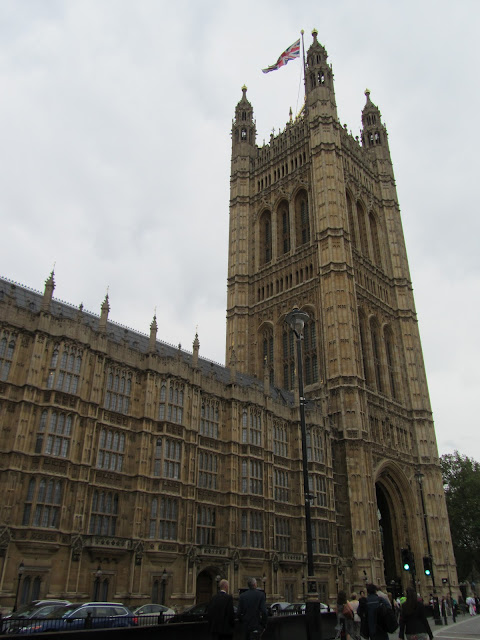 And I queued up at the Black Rod's Garden Gate (is it just me or does that sound a bit rude?) along with a whole crowd of other writers of every kind - fiction and non-fiction, academic, TV scripts, children's writers, technical - to go through security and inside the building.
We were shown into a long terrace-room right on the edge of the Thames. There was a string quartet. There was wine, champagne, strawberries and cream, little cakes and ranks of titchy triangular sandwiches. Writers love free food!

Sadly, photography is technically forbidden inside the House, but I did get someone to sneak me this shot on the terrace: 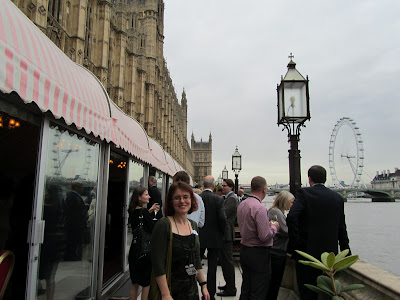 I met a lot of people! I had to 'fess up to what I did, of course - the first thing anyone asks is "What do you write then?" It was fun! Though it has to be said, it's the only public gathering ever where I've actually worried that my natural accent wasn't posh enough to blend in.

But it was just a total blast. Not me at all. I'm living someone else's life again!

And here I am with my souvenir tea-towel  :-D 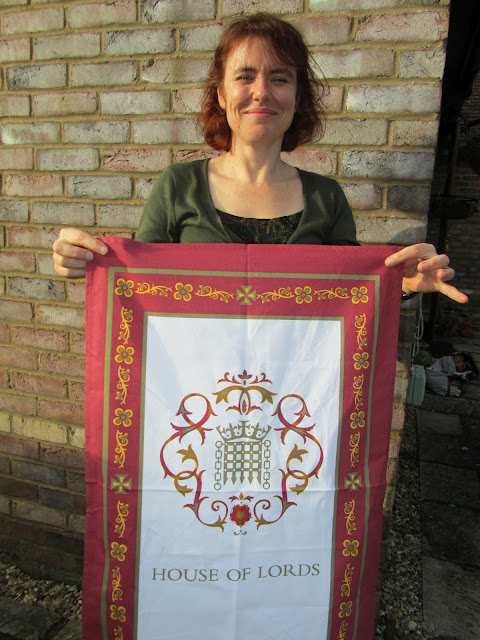 Posted by Janine Ashbless at 12:27

Email ThisBlogThis!Share to TwitterShare to FacebookShare to Pinterest
Labels: Janine in the flesh, losing my marbles, not working

Fun! So glad you went. You look like you're 12 and on a school trip in that first photo! It's so sweet :)

Will come and bow to the towel someday but you must come and see more TrueBlood first! *huggles*

I felt like I was on a school trip, Jo! And believe me, that was the photo in which I was pulling the most dignified expression - the others were all "Woo! Wooo!"

Elfsinger, I'm really looking forward to another Trueblood evening sometime. You may have to chase me to Europe though!