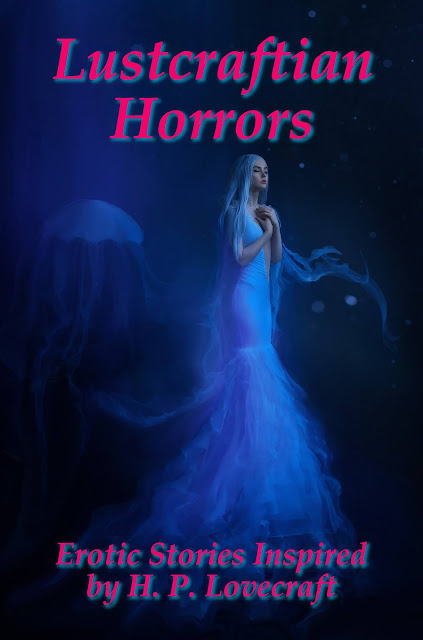 My story The Witch's Need appears in the Lustcraftian Horrors anthology, edited by Hydra M. Star, which is on release now! For all you fans of tentacles and unhappy endings...

Agnes looked around her prison, determined not to think more on the men, though the ache in her cunny made her clench her fists. They’d left her one candle in a horn-windowed lantern; it was just enough light to make out her surroundings. The crypt was rectangular, with two raised tombs either side of an aisle to a rear apse, where the stone figure of some medieval knight lay in state on his sarcophagus. Probably these belonged to the Squire’s own forebears, but they did not interest her greatly. The dead were not her provenance. More frustratingly—and more by luck than design, or so she assumed—the close-set flagstones and walls offered her no glimpse of the raw earth she hoped to find. Earth might permit her aid; stone did not.

She sighed and sat on the corner of one of the tombs, resting her sore legs. They’d kept her standing all day—another petty cruelty, like the fact she’d been given nothing to eat—but the pressure of the stone between her legs was soothing now and she tilted against the hard surface, grinding her hips. Then she lifted her layered skirts and touched her mound, sliding her finger into the slick furrow between her newly-shaven nether lips. Her sex felt strange to her, a foreign thing. Mother Hislop, the old bitch, had stuck her fingers inside during the search for the witch-mark, and Agnes had had to stifle her groan of involuntary arousal. She’d not been able to hide the slickness of her gape though, or the spasming clench of her muscles. Mother Hislop had been triumphant in her disapproval.

Ah, if only she did possess the powers they accused her of. She would like to blast them all with the ague and the cholera. Let them shit themselves to death.

Agnes pressed her fingers to her wetness then and worked it over her pip, hoping to comfort her need. It might be her last chance, she thought, before they hanged her on Whinney Gibbet for the crows to pick at. Maybe the next fellows to enjoy her hot cunny would be the worms that feasted there, and what pleasure would she get from that? This night could be her final ride.

Then she heard footfalls on the steps outside, and voices, and the rasp of metal. They were returning. She bit her lip.

When the Witchfinder walked into the crypt followed by two of his soldiers, Agnes was bringing herself to climax, her thighs spread wide, her feet braced on the carved stone of the tomb, and her hand working frantically on her exposed gash. She locked eyes with him, gasping as she tumbled over into her ecstasy, defiant in her shamelessness.

The two soldiers, hands full of the things they carried, stared with mouths open. She liked that.

“Are you quite finished?” asked the Witchfinder coldly.

She withdrew her sticky, pungent fingers with a grin and rearranged her skirts in a parody of decorum. The last waves of her bliss washed through her, balm to her rage and her need. “For the moment.”

Posted by Janine Ashbless at 15:40