Have you heard of the legendary warrior queen Semiramis? No?
She used to be a very rich subject for artists, but she's sort of vanished from popular culture now.

She's based on the historical figure of Shammuramat, who ruled the Assyrian Empire as regent for her son, in the 9th century BCE.


However, Semiramis the mythical/artistic figure is larger than life in every way! There are many (conflicting) legends about her; she was the daughter of the water-goddess Atargatis, was abandoned at birth and fed by doves until adopted by a shepherd (in standard heroic style).

As an adult she married a nobleman called Omnes, but conducted herself during a siege so impressively that the Assyrian King Ninus demanded her for himself. Omnes committed suicide, and Semiramis entered the royal harem - somewhat resentfully, the evidence suggests. When she bore a son, Ninias, Ninus offered her any boon and she said "Make me the ruler of the empire for one day." He foolishly agreed - whereupon she ordered the guards to kill him, and seized power in the name of her son. 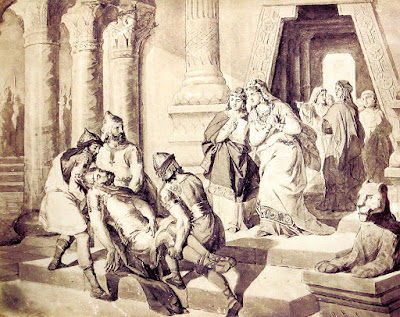 So Semiramis became de-facto ruler of the Assyrian Empire, which is about as big a game of thrones as you can win. She rebuilt Babylon and created the famous Hanging Gardens.

She was no hands-off ruler either; she was famous for leading her troops in battle, whether putting down rebellions or conquering new territories such as Libya, Africa and India. The most common depiction of her in art is when she receives the Call to War in the middle of her morning toilette: she seizes her sword, drops the crown and vows not to do up her hair until she is victorious.


Semiramis accumulated a lot of scurrulous legends too, because powerful women are inevitably objects of discomfort and gossip. She is said to have invented the practice of castrating boys to make eunuch slaves. She is said to have taken a new lover every night and had them executed in the morning to make sure they didn't get ambitious. 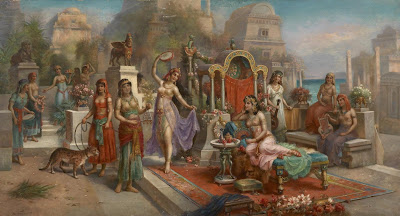 She is said to have had incestuous relations with her son, the prince Ninius! 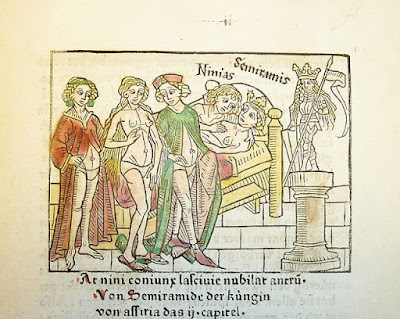 She got the hots for an Armenian king called Arar the Beautiful, and demanded that he shag her. When he refused, she went to war. He died on the battlefield and she had his body brought back to her palace for ... private contemplation. Then she told his people that the gods had brought him back to life, so no hard feelings, right?


She lived to a ripe old age and never lost a battle, but upon returning from conquering the armies of the Indus (her cunning tactics having included fake elephants), she was murdered by her own son, the only man she thought she could trust ... because children are ungrateful shits.

Semiramis is mentioned in Shakespeare, in Dante's Inferno (circle of Lust, naturally), and is the subject of a play by Voltaire and several operas, including one by Rossini.

And she's been the subject of some torrid movies! 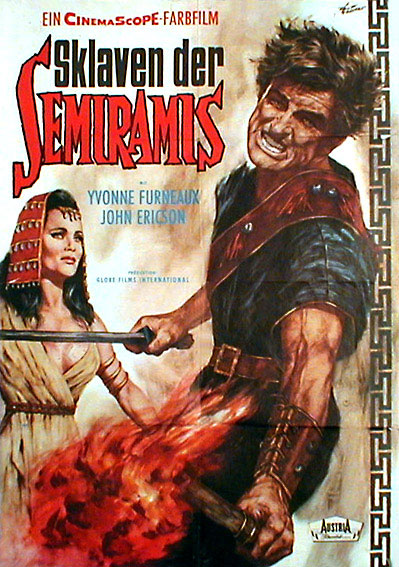 Oh ... she may still be with us. It upsets some among the paranoid religious right that Lady Liberty is officially based on depictions of Semiramis.

I love the varied characters you dig up and post on your blog.
Makes one feel almost normal. X

Love Semiramis! Thanks for the post. I learned some new stuff about her, and I LOVE the art work.

We are COMPLETELY NORMAL (ahem)