They shot my dog 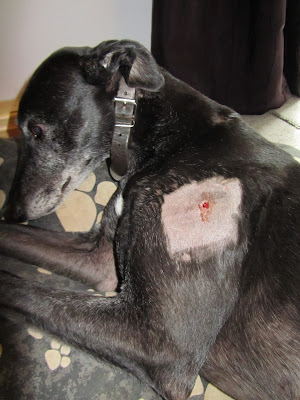 I was walking my dogs in a local park, and there were four teenage boys messing about on the other side of a fence. It turned out that what they were messing about with was an airgun. They shot Caspian in the shoulder while my back was turned. £400 in vets fees (general anaesthetic, x-rays, antibiotics) later, and the pellet is too deep in the muscle to remove without major surgery, so it's just going to stay there.

He's okay. He seemed to find the vet visits more traumatic than the gunshot, to be honest. No lasting harm done.

I discovered an interesting truth though. I'm an almost pathologically law-abiding person. I've never once been in trouble with the police, never even had a speeding ticket. But during that incident, I realised that if I'd been carrying a gun, I think I would have shot every one of those boys. Cold-bloodedly. Without hesitation. I would have wrecked my life (and Mr Ashbless' life incidentally) for the sake of revenge on those who hurt the ones I love.

Not to mention wrecking the lives of those young men. But frankly, fuck them.

So I learned how vital gun-control is. Because the line between decent, moral, law-abiding citizen and killer is ... an illusion. Or simply a matter of context.
Posted by Janine Ashbless at 10:13

Email ThisBlogThis!Share to TwitterShare to FacebookShare to Pinterest
Labels: the human race is crap

Glad he's not in any danger, though. Please give him a (gentle) cuddle from me.

I hope those little (insert appropriate swear word here) get what's coming to them. So bloody cruel.

Janine—oh. I am so glad Caspian is okay. When I saw this post title it took my breath away for a few seconds.

I do hear what you're saying—in the past, I felt very similarly to what I interpret you as describing.

I also appreciate your evocation of illusion. The prevalence of illusion seems an important recognition, to me.

I hear you Janine. I know for a fact that if gun control was as lax in Canada as it is in the USA I would have at least threatened someone with a gun, if not shot them or myself. As you say, the line is thin.

To cold-bloodedly shoot your dog,for, I guess, fun, while the dog was out for a walk with you is revolting. Dirty little bastards. I gave up giving a damn about delinquents when boys 2 or 3 years older than my little girl would physically kick and punch her whenever they could and then simply lie about what they had done. In fact, I was (and still am) surprised that so far, to my knowledge, there hasn't been an incident of a parent showing up at a school and shooting a batch of bloody little fuck wads.

I'm glad your poor pup is okay. Dogs are so loving and humble and good. In fact, my recently departed pup was abused, ended up in a shelter, was adopted out to a drunken neighbour who let the dog shiver out in the cold while she binge drank and still was able to heal and be happy and loving and sweet, once she came to live with us.

If dogs can do it, why can't these little pricks? Maybe you'll see them again and you can turn them in.
Love to you and your family.
MaD

I'm just outraged. I'm glad you are OK and that Caspian is on the mend.

And, whilst I understand what you're saying about the need for gun control, if you do decide to take matters into your own hands rather than relying on the law, please remember that I can be called on as an alibi or I have a shovel to help bury bodies.

Oh, how bloody awful. Are there any cctv cameras around your way (seems they're virtually everywhere these days) that the police can check for the identities of these little shits? So, so, angry on your behalf.

Oh, Janine. I'm so sorry. I can't believe it. While you were right there, too? That's so completely extreme. They should have to pay the vets fees, fines, huge compensation... and they'll probably never have to face up to what they did, in financial or emotional terms.

I'm so sorry this happened. I'm lost for words.

Thank you everyone. Your sympathy means a huge amount to me. There are a lot of good people in the world too, I know. It's easy to lose perspective and see only the black side, or see only red - that's one of the things that I wanted to express, how easy it was for me to lose perspective - but the world goes on, irreducably complex, part heaven and part hell.

I'm heading away from the PC for the weekend now, so I won't be online - but thank you all again for your thoughts. Caspian and I are both happy :-)

I'm not a violent person, but I would feel the exact same way as you do. Poor sweet dog! I'm glad he is okay.

Apologies for not commenting sooner, but it's taken me a while to calm down. I considered dropping in but would probably get upset and want to patrol the park with non-larp weapons...

Hope Caspian (& you!) are doing OK. Hugs for you both, hope to see you soon.