Every Monday I post a sexy excerpt for your entertainment!

Today's guest is Lea Bronsen, with an excerpt from her new menage story, High Risk Fever: 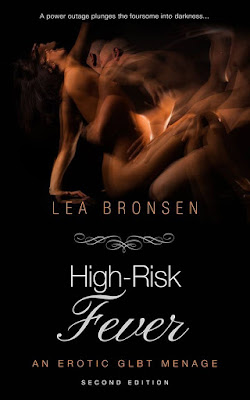 Two young and indecently handsome bicyclists visit a village in the French Alps during the summer holidays. Forced by a raging storm to spend the night at the local bed and breakfast, they invade the quiet lives of hostess Anne and her husband, Brian.

A power outage plunges the foursome into darkness, encouraging new liaisons to form, life-long secrets to be unveiled, and steamy lessons to be learned. But once the storm moves on, can the four find a balance and resume their normal lives?

Confident she was invisible in her dark corner of the living room, Anne silently descended the stairs one after the other with steps as soft as cat paws. At the bottom, she bent her head to see the scene unfolding at the other side.

Atop the coffee table, a white candle burned next to a bottle and a glass, creating a romantic atmosphere. Behind the swirling flame, the two young bicyclists sat close together on the bordeaux couch, dressed in pullovers and sweatpants, entangled. Gentle candlelight caressed their smiling faces as they stared into each other’s eyes, murmuring words Anne couldn’t hear, and…uh…kissing.

The truth hit her like a slap in the face. So that explained Todd’s hostile behavior in the kitchen, when she was talking to his lover, apparently. He thought Micaela was hitting on her!

Well, he had been.

An array of contradictory feelings assaulted her. She closed her eyes and sat on the stair. This was voyeurism, secretly witnessing two people’s intimacy. Jealousy and deceit, too, as a little earlier, she was the one Micaela attempted to seduce. That, and shock, because she had never before seen two men—

Low moans made her open her eyes again.

The guys were sharing wet, open-mouthed kisses, and fondling each other’s chests and stomachs beneath the pullovers.

Whispering something into Micaela’s ear, Todd snuck a hand down to his own pants, leaned back, and pulled out his fully erect cock.

Anne stared in disbelief. This was getting seriously pornographic!

Smiling, Micaela moved a hand to Todd’s huge erection, grabbed it at the base, and leaned forward until close enough to touch its head with his half-open lips. His long, black locks slid down his shoulders, glowing in the soft light.

With a guttural sound of excitement, Todd closed his eyes, moved his hand to the other man’s shoulder, and stroked him.

Micaela opened his mouth and licked the tip of the thick shaft, letting his tongue glide around in playful circles before taking the length deep into his throat.

In response, Todd threw his blond head back against the couch, arched eager hips to meet Micaela’s sucking, and groaned. “Oh fuck, man.” He laughed.

Paralyzed, Anne blinked before shaking from her daze. She couldn’t watch this strictly private moment between two other people. Besides, at any moment, Todd could open his eyes and notice her sitting on the stairs. Then, what?

Encouraging his lover with his hand, Todd laughed again, and gasped.

All right, let’s get out of here.

Careful not to make any abrupt movements, she stood and retreated up the wooden steps, holding her breath—but the next stair gave a small, treacherous creak under her weight.

The sound sent icy fear through her from top to toe, and the hair on her neck stood. She imagined the clank echoing between walls in the darkened living room. Frozen, she held her breath and tried to detect any sound above the heavy rain hitting the asphalt outside. A voice, a gasp of shock, something.

But, no, complete silence lingered behind her.

Maybe they hadn’t heard the noise, and she could walk up the stairs pretending nothing had happened. Or….

Curiosity gnawed at her. She needed to look, wanted to know for sure.

Inch by inch, she turned, careful not to make the step squeak again. She bent her knees to see underneath the ceiling and gazed at the guys on the couch.

Behind the dancing candlelight, Todd’s emerald eyes were wide and set on her.

She loathed it, loathed herself.

Meanwhile, Micaela’s head kept bobbing up and down in his lover’s lap, oblivious to her gaze.

Nausea tightened her stomach as she stared, holding Todd’s look. Sweat formed under her armpits, and cold droplets glided down her torso, meeting the waistband of her pants.

She couldn’t define what his steady, intelligent eyes were stating. In the dark, the flickering candle flame reflected his pupils, but he didn’t blink once. Maybe he just didn’t mind her seeing him getting sucked by another man.

She needed to leave.

The same moment she made up her mind to turn around, he threw his head against the back of the couch and closed his eyes. A long groan of pleasure escaped his parted lips. Arching his whole body, he grabbed a fistful of Micaela’s long, black hair and yanked backward.

The Italian gave a throaty chuckle, but didn’t stop. As if encouraged, he moved his hand from the base of Todd’s erection to beneath the waistband and inside his pants. Though she couldn’t see him, she knew he was cupping Todd’s balls and fondling them, all the while expertly working his lips and mouth on the hard cock.

Pulling harder at Micaela’s hair, Todd grimaced and began to groan in rhythm.

His imminent release transfixed her. Heat filled her lower stomach.

She swayed on the stairs and leaned against the wall to steady herself.

Micaela brought his other hand to Todd’s engorged cock. With a playful grin, he withdrew his mouth and kept it open above the tip while giving it short, vigorous strokes.

A few more seconds of pumping, and then came his reward. Todd pressed his hips upward with a growl, and long rushes of thick white liquid ejaculated from his cock into Micaela’s open mouth. As he swallowed, more semen ran down alongside the cock’s head and over his fingers, glistening in the candlelight.

Growling a last time, Todd let go of his lover’s hair and covered his grimacing face with trembling hands. "Oh my fucking God.” He breathed hard. 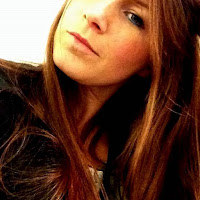 Get the print edition on Amazon

Posted by Janine Ashbless at 16:10

Thank you so much for spotlighting High-Risk Fever!