This is where I am with my WIP right now: 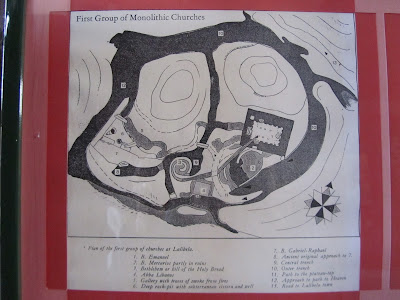 At 35,000 words - coming up to half way - I've finally got my characters to Ethiopia, thus totally justifying my holiday there last year. And hell yes, I'm using those thousands of photos I took for reference purposes. I WANT TO GET IT RIGHT ... not that anyone reading the novel will care. *sigh*

As a die-hard Pantser, at 35K I've also hit the point where the writing process becomes really complex - a bit like doing a jigsaw where every piece has to be hand-carved as you go along. I'll sit down to write a new scene, moving the plot an other notch forward. But inevitably I also have to go back to one or more previous scenes to add a few lines of dialogue or a single adjective, to tie that scene into the new one. I have to make sure that the characters can proceed logically from one action to the next instead of making gigantic lucky guesses, and that they can look back on past scenes and suddenly realise the significance of a event or observation. That means a LOT of infilling of details.

Three times now I've had to go back and insert entire new scenes that round out character motivation, or that will have the desired plot effect eight chapters down the line. And more embarrassingly, I've also had to backtrack to remove stuff. But just once.

Every scene must pull its weight. There's no padding.

I go to bed every night thinking about plot and wake up every morning thinking about plot. I've grown increasingly non-verbal around Mr Ashbless, as I'm constantly trying to keep every story detail in mind until I can get them written down.

Don't marry a writer, folks. Or maybe check if they are a Plotter or a Panster first!
Posted by Janine Ashbless at 19:28

Email ThisBlogThis!Share to TwitterShare to FacebookShare to Pinterest
Labels: The Valleys of the Earth, WIP, writing


I'm a pantser, and I am forever having to go back to find out whether a certain character had a certain characteristic that is relevant to what I am writing now. Last night,for example, two of my characters were being held captive, and they had bare feet. Then, when someone was planning to rescue them, she was cutting up a sheepskin to line their shoes and make them more comfortable. But they don't have shoes, I shouted at myself! Still later, their captor, going off for the day, decided to confiscate their shoes to prevent them escaping through the forest. BUT THEY DON'T HAVE SHOES, I YELLED AT MYSELF. Do I go back and change the earlier chapter, or re-write the current one? Still, I prefer writing this way. Couldn't bear to be a plotter.

Dang, yes Rachel! You have to be so careful with the details (eyecolour, anyone?!)... The chunk I removed involved my heroine walking a dog. It was useful to have the dog because it gave her an excuse for going for a walk, and a reason to bring a conversation to an abrupt end.

Then I remembered .. dogs are bloody terrified of her. She can't walk the dog. Hmph. Bye-bye 500 canine-related words.